While Flight Control [App Store] may be Australian developer Firemint’s runaway hit, they’ve been hard at work for months on Real Racing [App Store]. Prior to last week, all we saw of Real Racing was a screenshot or new trailer randomly pop up here and there, leaving iPhone communities all over the internet speculating what the final product would be like.

I’ve found most iPhone racing games somewhat unappealing. While accelerometer tilt controls translate great to driving controls, they’ve all just felt a little flat. EA’s recently released Need For Speed Undercover [App Store] came close to quenching my thirst for a great racer on the platform, but fell short for a number of reasons, in my eyes. Poor AI combined with races that were hard to lose had me quickly growing bored of the game, despite its doing a great job at capturing the Need For Speed feel on the small screen. 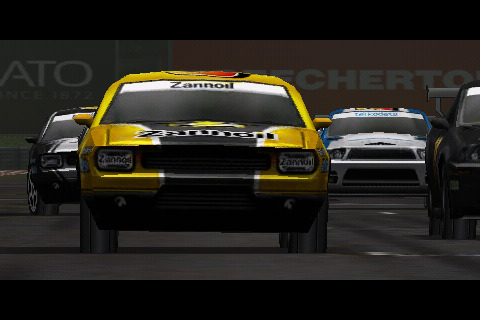 Real Racing is an entirely different animal. In my previous hands-on, first impressions post I mentioned how great the AI is, and countless races later I still feel this is Real Racing’s greatest asset. The AI opponents play how they should play; they’re not mindless drones following a simple line around the track, they’re extremely competitive racers that just flat out won’t put up with you trying to cut in front of them, or leaving yourself open on a turn. 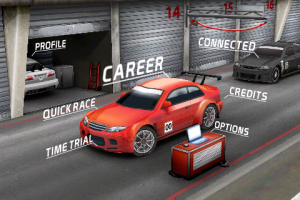 It really feels like you’re playing against human players. It’s crazy. Just like on XBOX Live, how you would ram someone’s rear corner as they pass you to try to make them lose control, the AI in Real Racing does the exact same thing. It’s a night and day experience from other iPhone racers that I’ve played where you’re largely ignored by the slow moving AI opponents and the difference this makes in the overall feel of the game is hard to put into words.

There are three types of cars: Hatchbacks, sedans, and muscle cars. Each car has its own set of races in career mode, starting with a qualifier, then two sets of events. After your first qualifier you unlock the Monacato 500 Hatchback Championship C class. 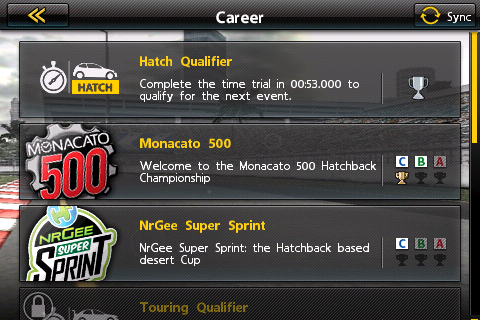 Win the three races that make up the championship and you will unlock its B class as well as a new car and the NrGee Super Sprint C class event. The rest of career mode continues in this manner, and each car or track you unlock becomes available in quick race and time trial. 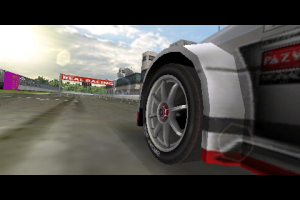 I fully admit I was as skeptical as everyone else when the trailers were released, but Real Racing is something you really have to see to believe. Firemint honestly deserves some kind of award for the technical accomplishments made with the graphics engine powering Real Racing. It runs at a higher framerate on my iPhone 3G than most 3D games at a level of detail that is comparable to what you would normally see on the PSP. I can’t even imagine how this game will play on the upcoming iPhone 3G S.

Real Racing defaults to the cockpit view and, with a pair of headphones on, the only game that even comes close to rivaling the immersion experienced is 2XL Supercross [App Store]. Instead of any kind of on-screen HUD, your speed, position in the race, current time, and other relevant data are displayed on the steering wheel and pillar mounted gauges. One thing that I would really like to see added is some kind of mini-map. While I appreciate their HUD-less interface, a mini-map would be extremely helpful in learning the tracks and allow you to more accurately determine when to brake, approaching corners. 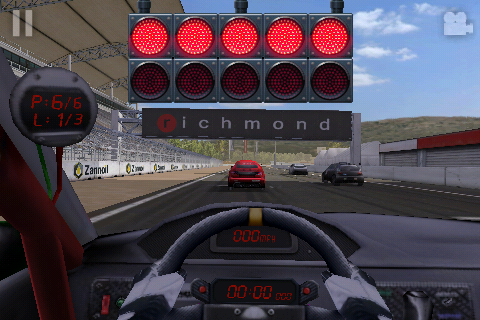 Real Racing has no customization of the included cars, which may disappoint some racing fans looking for a true simulation style racer on the iPhone. There isn’t any kind of upgrade system, and while the different unlockables no doubt add quite a bit of replay value to the game, it pales in comparison to Gran Turismo-style car collecting and upgrading.

All in all though, it is a mobile game, and one of the most detailed and complete racing experiences offered on the App Store, so I have a hard time getting too worked up over not being able to add turbo boost, spoilers, and custom exhausts to my cars. The racing experience in Real Racing is unrivaled, and that’s what counts.