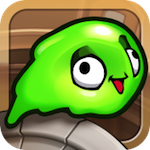 I gotta hand it to Spunk and Moxie ($1.99). It’s a 2D platform game that actually plays to the strengths of the iPad and iPhone’s touch screen while still offering a challenge. It’s also a looker, too, and has a ton of charm to spare.

Backing up: in the game, you play as a blob that auto-runs. You’re in charge of jumping and the timing of those jumps with one-touch screen controls. The longer you hold down on the screen, the higher and longer a jump. The level and scenario design does all the heavy lifting. As you play, you’ll be tasked with squeezing through passages by timing a jump perfectly, avoiding pits, and generally progressing through each level’s maze-like structure. There’s also potions, which give your characters’ powers. The red potion is the one you’ll see the most in the following. It gives Spunk the ability to smash crates that would otherwise be blocking the way. The catch is that the effects are timed.

Anyway, if you’re in the market for a new platformer, you should probably check out our video. This game is really fun and surprisingly difficult at points.