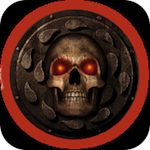 Baldur’s Gate: Enhanced Edition ($9.99) is a faithful port of the classic AD&D computer game, and that in itself is an impressive thing.  Overhaul Games put a lot of work into this one, massaging the antique codebase, agonizing over the implementation, adding a new tutorial and arena-brawling in the Black Pits.

Fans of the original Baldur’s Gate have been drooling over this one since it was announced, and we were pretty jazzed as well. When the game hit, players with anything older than a 3rd generation iPad had problems that varied from minor irritations to unplayable crashiness, but the new patch seems to have fixed those issues for nearly all iPad 2 / Mini users, and greatly impoved original iPad performance (results still vary). 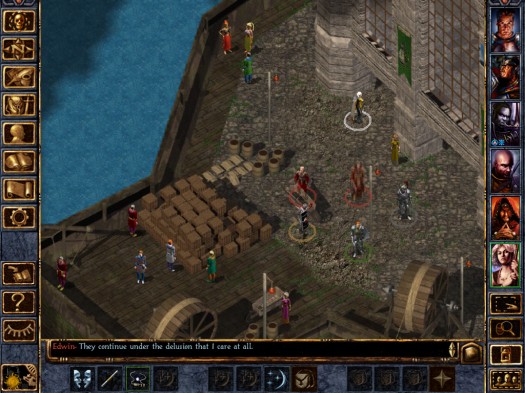 As someone started playing AD&D in gradeschool but somehow missed Baldur’s Gate the first time around, I was dying to finally get my turn. I came in overconfident, and I went down like a first-level Wizard in melee combat.

The learning curve on this game is crazy steep, even in you play the (new) tutorial first. Even being familiar with AD&D, I had a lot to learn about the real-time with “almighty pause" (you can give orders while paused) gameplay. I’m still not sure if my auto-pause settings (pause whenever X happens) are optimal. This will be heresy to true fans of the game, but there were times when I yearned for the turn-based combat of the “gold box" games.

AD&D itself is part of the challenge. I’d almost forgotten that an unspecialized AD&D Wizard can only cast one spell per day at first level. Of course, the faithful implementation of the AD&D ruleset is one of the major appeals of Baldur’s Gate, so critiquing the AD&D system would be unfair. 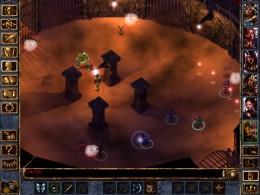 One of the things I generally appreciate about classic games is the clarity of their art. This is not the case with Baldur’s Gate. Part of the problem may be that I was playing on a Mini, not a Retina iPad, but the game often made me feel Mister Magoo, and if it wasn’t for the red circles around enemies and the magnifying glass “highlight things you can interact with" button, I would have been completely lost.

Perhaps most crucially, the game doesn’t feel like it belongs on a touchscreen. There’s a lot of scrolling around to do that would be easy enough with a mouse, but becomes tiresome when it’s swipe-swipe-swipe, and if you fail to pause when something important is happening off-screen, you’re screwed. I wish there was a way to have the display autoscroll around your character/party, but Baldur’s Gate just wasn’t designed that way.

Also, some of the hotspots are fidgety. I’ve walked through doorways only to find that I tapped the wrong spot and the next room won’t load unless I step back and try again, and trying to tap around the doorway never seemed to help.

I assume that these flaws are the result of  the game’s antique codebase. There are, however, smaller elements of the control scheme that Overhaul truly could have done better. 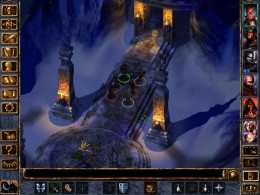 Implementing some sort of gesture as a touch-anywhere pause would have been immensely helpful, the equivalent of the hotkey that PC gamers had back in the day. A way to toggle the “magnifying glass" on would have been very helpful: as-is, you have to hold it down. As soon as you let go, the highlighting disappears.

There are also places where the dynamic lighting really is insufficient, including parts of the new tutorial. The game menu has a graphics option, but it has been disabled: the only thing you can do is leave the game and crank up the overall brightness on your device. I can’t help but think that that Overhaul could at least have left in or added something like the old “gamma correction" brightness crank on PC games of this era.

Despite these flaws, this is still Baldur’s Gate on your iPad. If that’s what you’re after, you’ll climb the difficulty curve, (re-)adjust to AD&D’s quirks, and scoff at my petty complaints about the graphics and UI. We are talking about an epic fantasy RPG, renowned for its plot, characters, world, and innovative system. This is a game that changed CRPGs forever.

Ultimately Baldur’s Gate: Enhanced Edition is a flawed but admirable port of a game that fundamentally isn’t touch-friendly. If you’re still on the fence, just know that this game requires commitment. There’s gold here, but Baldur’s Gate keeps its treasure for the dedicated and does not tolerate dabblers.