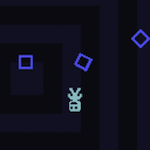 Super Hexagon creator Terry Cavanagh is testing a port of his other notable game, a pyrotechnic platformer called VVVVVV, on iOS. In a tweet this morning, Cavanagh said he’s been trying to complete “no death mode" in the game on an iPhone when he has a couple of “moments to spare here and there." That doesn’t mean a release is imminent, though. He also noted that it’ll be “ages" before we see it.

If you’re not familiar, check out the video we’ve embedded below. In a nutshell, it’s a retro-inspired platformer with some radical music and a really neat “flip" mechanic. We can definitely see why it’d take awhile to nail an iOS port.