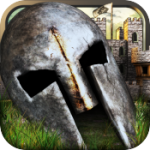 We’ve been watching Foursaken Media’s Heroes and Castles ($1.99) ever since we got wind of its existence shortly after the release of N.Y. Zombies 2 ($0.99). Departing from its comfort zone, Heroes is certainly its most ambitious title by combining both third-person action gameplay with castle defense and resource management. That sort of combo on iOS would be intriguing on its own, but Heroes and Castles also does an excellent job implementing it, making it another winner for the developer.

Simply put, Heroes and Castles is a game of third-person combat and castle/tower defense. Players control one of three heroes (each with their own attacks and moves) against a horde of undead looking to destroy your keep. As you play, you continually earn gold, which can be used to purchase buildings and recruit armies. Units come in  various types, such as the archer which stays on your wall shooting from afar, the pikeman which has piercing damage or the peasant which are cheap but plentiful. Meanwhile, buildings range from essentials such as the gold mine (which increases your rate of gold accumulation) to arrow towers and ballistas (which target enemies) to even support structures which improve your units. 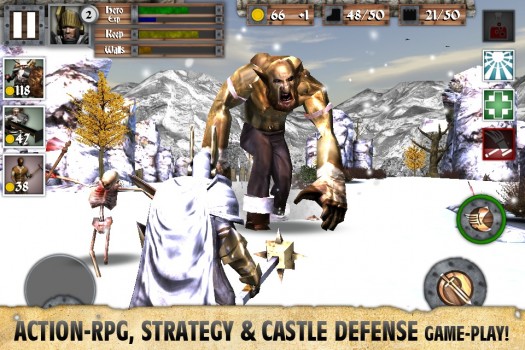 The undead horde also comes attacking with a wide variety of enemies. While enemies and tactics change from mission to mission, the end result is always the same: take out the undead before they destroy your keep or kill you. You’ll have to utilize your heroes attacking (and support) skills directly while recruiting additional units and building and maintaining keep structures.

One of the things I enjoy about Heroes is the simple fact that there’s always something to do. Whether it’s monitoring resources, building structures, hiring (and defending) recruits, or simply going on the offensive, Heroes does a good job keeping you busy multitasking. It’s important to note that it is imperative that you keep tabs on all these facets as well; players that focus solely on one-on-one combat or castle building are going to have a hard time. 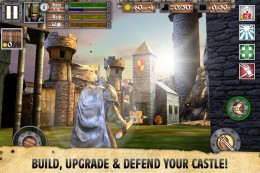 Thankfully, the tools available in Heroes and Castles do a decent job allowing players sufficient access to manage the multitasking directive. Quick menus allow you easy access to all buildings and recruits. In addition, there are plenty of status bars to monitor hero health, keep integrity and wall strength. It would have been nice to squeeze some sort of mini-map on the screen, but the game feels cramped enough with what it does have (particularly on the iPhone).

While Heroes certainly keeps you busy in the short-term, it also offers a wealth of hero stats, traits and upgrades that also keep players focused on the long-term. While playing out missions, heroes earn experience towards level-ups, which bestow points that can be spent on attribute increases and traits (each hero gets three active and three passive traits). As expected, traits vary widely between heroes and range from aura buffs to powerful attacks to even random spawning of powerful recruits. 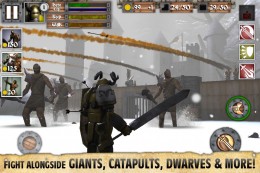 Meanwhile, completing a mission for the first time with a hero earns crystals which can be used to upgrade both your buildings and units, with each upgrade increasing various stats. In addition, players can randomly earn runes, which can bestow random stat increases (and can also be created with crystals). When you take into account all the available upgrades, traits, stat increases and possible runes, Heroes becomes one of the deeper games around.

As if the sheer depth in terms of gameplay and upgrades wasn’t enough, Heroes and Castles ups the ante with the inclusion of Co-op mode. Players can team up and take on the hordes of undead with different strategies and techniques than what would typically be available going solo. In addition, co-op mode makes it easier to acquire rare runes, thus providing an incentive to try it. While I had some trouble actually completing long-term co-op matches, I still found it fun nonetheless.

There’s a lot to love about Heroes and Castles, but a few nagging issues keep it from the top echelon of enjoyment. While the game’s secondary controls for building and recruiting work well enough, the actual hero controls can be improved as movement can be stiff, and hit detection is a little imprecise. Visually, Heroes doesn’t look quite as nice as, say, N.Y. Zombies 2, but at least it plays with a smooth framerate. In addition, while I welcome the challenge inherent in Heroes, it does encourage the purchase of additional crystals to give yourself an advantage on some of the harder missions.

Still, these issues are minor in the great scheme of things. Foursaken’s Heroes and Castles does a great job of not only successfully melding third-person combat with tower/castle defense, but also creating a game with a great deal of replaybility via its heroes, upgrade system and online multiplay. Checking out the game’s menus reveal the developer’s desire to add new single and multiplayer modes, which I hope indicates a commitment to improving an already great game that is receiving a lot of attention in our forums.