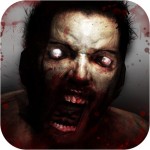 We’ve been keeping tabs on Foursaken Media’s zombie sequel since we heard that one was in the works earlier this year. Considering the large cult following that N.Y.Zombies ($0.99) garnered in our own community, there was certainly some excitement to see if Foursaken could repeat and expand upon its successes. N.Y.Zombies 2 ($0.99) certainly accomplishes those goals. With great visuals, an expanded skill set, online co-op and well done presentation and theatrics N.Y.Zombies 2 is a great sequel and worth the wait.

Following the journey of a survivor of the zombie apocalypse, N.Y.Zombies 2 charges you with trying to stay alive in a world now ravaged with the undead. Story missions are separated by location, with the narrative being driven via journal pages that act as the story progression between levels. While a decent story isn’t a particularly pressing prerequisite for a good survival based horror game on iOS, I still enjoyed the narrative techniques used by Foursaken in setting the tone for the rest of the game. 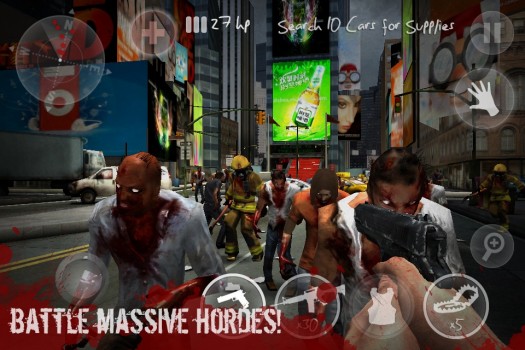 While the story in N.Y.Zombies 2 does a decent job in setting the mood, the visuals and overall presentation do a great job solidifying the overall horror theme. Environmental and character graphics are vastly improved over its predecessor with your undead enemies actually looking a bit scary. Meanwhile the locations, which include a lot of familiar NYC sites, do a great job looking pretty eerie with overturned vehicles, dilapidated structures and all the other fixtures indicative of an undead invasion. They aren’t the best visuals I’ve seen on iOS, but they certainly get the job done.

In addition, I was a big fan of Foursaken’s attention to detail which even goes as far as the menus and mission selection screens. Each screen has an old-school grainy effect reminiscent of classic horror movies. Sure, these little touches aren’t essential to making a good game, but it’s appreciated nonetheless for creating a cohesive theme.

Another area that N.Y.Zombies 2 greatly improves upon its predecessor is the inclusion of additional RPG elements as well as an expanded weapon selection. Completing missions award money, which can be used to purchase and upgrade a variety of standard weapons (such as the pistol, rifle, submachine gun etc.). Finishing story missions also award skill points, which can be used to unlock skill perks. Perks are divided into three trees, which focus on ranged damage, melee damage, and defensive/survival skills. While the specific skills that can be unlocked are pretty standard, I’m still a fan of its inclusion as it adds a nice layer of strategy and offers players an opportunity to customize play style.

Meanwhile, N.Y.Zombies 2 has a few additional elements that go a long way towards differentiating it from the rest of the zombie games. Co-op, while a bit difficult to start, is a fun time that definitely adds to the experience. Multiple difficulties and optional missions (complete with supplemental rewards) add a great deal to the replayability. While N.Y.Zombies 2 has its own dual currency system, optional missions do occasionally reward the premium currency. In addition, most of the items requiring said premium currency are optional, making it far less of a paywall than other similar titles (of course, you can always buy either currency and skill points via IAP if you want a head-start).

There’s a lot to like about N.Y.Zombies 2, but one area that I have some reservations is its controls. The game employs a pseudo dual-stick system supplemented with a host of on-screen buttons for switching weapons, reloading, interacting with objects, and aiming. While the controls work well enough to play, I feel like there’s too many controls on screen that could be replaced with various swipe controls. In addition, I found the actual movement and aiming to be a bit sluggish, even on an iPhone 5.

Still, what issues I experienced with the controls aren’t enough to detract from the overall experience. N.Y.Zombies 2 is still a very enjoyable horror shooter that expands upon its predecessor in nearly every way. While the landscape for zombie-themed games has become a lot more crowded in the past few years, this new entry in the franchise still has what it takes to keep it above the throngs.

With decent visuals, a great cohesiveness of thematics, and a good amount of content and replayability elements, N.Y.Zombies 2 is worth checking out for any horror fans.