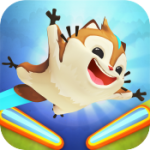 I’m what you might call a pinball dilletante. Oh sure, I’ve played a table here and there, downloaded a few pinball games and poked around, but I lack discipline. I dabble, I don’t commit. I’ve never learned to play with real accuracy or attention to the goals of the game beyond keeping the ball in play.

Momonga Pinball Adventures ($1.99) has changed all that. I discovered a reason to learn to be accurate, to pay attention: furthering the adventures of a ludicrously cute flying squirrel named Momo. A momonga, to be precise—a Japanese dwarf flying squirrel. He is the ball in this game of pinball, and he’s on a mission to save his people.

Pinball adventure games are a niche within a niche, so maybe it’s best to think of Momonga in broader strokes. It’s a game of tiny challenges, a handful of which are stitched together to build a level. A beautiful level: Momonga Pinball Adventures is better crafted than most of what we see on iOS, with lush 3D environments that vary wildly and a simplified style that looks great on the small screen. Paladin Studios says that one level can take up to two months to create, and the effort shows. 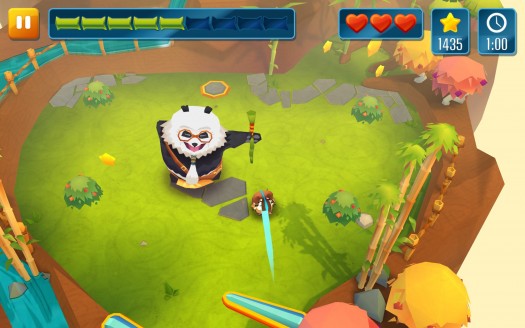 But let’s step back to the content of those levels. The game’s story mode presents a series of fairly straightforward challenges of the flipper-control sort. Knock Momo into a few targets, then a few moving targets, then a few still targets immediately followed by moving targets. For anyone with more skills with a flipper than me, there probably won’t be much need to slow down—especially with only 9 major levels.

Of course, that’s just the trip through the game’s simple, charming story. After each level is finished for the first time a series of challenges unlock. These present new reasons to run through: breaking every block in a level, collecting all the stars, or dipping into more obscure paths and procedures. When you’ve cleared a few of these you’ll also unlock an odd little endless mode that has nothing to do with pinball. It’s delightful nonetheless. 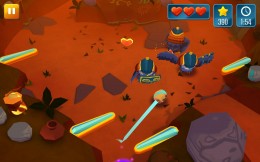 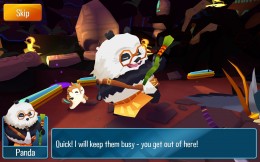 There are a few stumbling blocks on the way to freeing Momo’s people and really sinking your teeth into Momonga Pinball Adventures. Failing at challenges can be a huge hassle, for instance—the relevant portion of a level might be midway through, after a good chunk of loading, a few cutscenes to skip and a section or two that needs completing. Failure is generally this game’s biggest problem: I find myself wondering what a three-life limit adds to the experience aside from frustration.

Otherwise it’s all about the pinball physics. They’re good, but not great. The action is pleasantly fast. The flippers feel good, with a simple left-side/right-side tap control, but they can’t pull off some of the light lobs or quick shots experienced pinball players might expect. There’s also no way to tilt the board—it’s not a board, it’s a level. That’s the saving grace, really. Momonga isn’t built like a pinball game, so it doesn’t suffer badly for missing some of pinball’s finer features.

Momonga’s Pinball Adventures is already a winner. In part for its impressive look, certainly, but the charm and challenge of the game are a big part of what makes it so loveable. If anything stands in its way now, it’s simply that Paladin Studios has already squeezed everything it can out of the existing content—new levels are all that will keep the game going now. Given what goes into them, that might take a while. Just don’t mistake this for a complaint: more Momonga will be well worth the wait, and there’s plenty of tiny squirrel action to love for the moment.