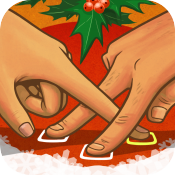 One of my favorite things about iOS devices are their large touch screens, especially on the iPad. Some developers have really explored this facet by offering great same-device multiplayer modes, or entire games built around just that idea. Normally these offer experiences that are amongst my very favorite in all of gaming. In our increasingly online lives, it’s just great to get together with friends in the physical world for some gaming, and sharing a single device is about as personal as it gets.

It’s not relegated to just one device though, as more and more people adopt the iOS lifestyle that means that chances are more likely that you’ll be together with a group of friends who are equipped with either iPhones, iPod touches, or iPads. The games listed below all exemplified how much fun getting together with friends and playing together can be, and how like board and card games iOS devices are now amongst those considered for passing the time while entertaining groups of friends.

Fingle, $1.99 – [Review] – [Forum Thread] – Fingle is a game that’s… provocative, to say the least. Right from the icon that alludes to some form of finger dirtiness, Fingle gets real personal with your partner real quick. While simply a game of finger Twister at its core, Fingle doesn’t shy away from its sexual undertones. There’s lots of groping and rubbing going on, and the game encourages it every step of the way. As long as you aren’t playing against your grandmother (ummm, awk-ward) Fingle is sure to bring a smile to everyone’s face.

Ring Fling, $1.99 – [Forum Thread] – Ring Fling takes the franticness of something like Hungry Hungry Hippos or Crossfire and digitizes it for iOS devices. Each player up to 4 takes a corner of the screen, and then does exactly what the title suggests: fling rings in an attempt to knock the most stars into the goals of your opponents. It’s wildly good fun, especially with a full 4 players where screen real estate gets cramped and hectic, in a good way. As a bonus you can also play against the AI by yourself, which eliminates the difficult task of interacting with other human beings (but isn’t nearly as fun).

O., $1.99 – [Review] – [Forum Thread] – This is another ring flinging sort of game, but adds in a novel color-matching combo system to the mix that creates a more subtle, strategic battle against your opponent as opposed to the franticness of Ring Fling. They both have their merits in different ways though, and if you know you’re going to be huddling around an iPad with some friends or family this is another good way to spend that time.

Bloop â€” Tabletop Finger Frenzy, $4.99 – [Forum Thread] – Bloop takes the simple concept of tapping away at blocks on a screen and adds multiple players into the mix. The result is complete chaos as players try frantically to tap the most blocks of their particular color. It’s the kind of thing that’s easy enough for anybody to grasp when you shove your iOS device in front of their face, making it a fun option to play with people even if they aren’t typically into games. This great trailer should show you exactly what you need to know about Bloop.

Spaceteam, Free – [Forum Thread] – Oh wow, Spaceteam, you guys. This might possibly be the biggest hidden gem of the year. It collects up to 4 players, each with their own iOS device, to command a different panel of a spaceship’s control deck. The ship is on a collision course and gives you instructions on what buttons to hit and knobs to turn to correct the situation. The catch is that it gives you instructions for your other team members, meaning you’ll end up shouting instructions at each other in a panic trying to perform your actions in time. It’s insanely fun, and easy enough for anybody to grasp. It’s also a free download so there’s no reason not to give it a shot if you find yourself in the company of some iOS owning friends. I promise, you won’t be disappointed.