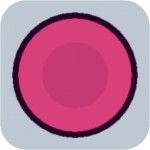 Michael Brough’s O ($1.99) is a high speed, all fingers-on-deck two-player game so ingenious that it’ll make you wonder why no one’s created it sooner. O feels like a classic board game evolved to make use of the large touchscreen. The goal is to fling circles of the same color into your score area until you reach 70 points; the value of each circle increases by one each time you combo. The secondary goals become breaking your opponent’s color combo and stopping other colors from entering your point area.

Soon enough, everyone’s playing finger-twister, as the circles randomly generate. While the rules of the game remain simple, the human competitive component elevates the game even further. Some finger karate may occur, loosening your player’s grip on pieces. This really intensifies the psychological hold O takes on you, in addition to the panic of waiting to see where and what color pops up next.

As O battles escalated, I had to create some additional rules for a slight reprieve. One such rule involved restricting play to only one hand. Word on the street is that some fights haven taken place off of the iPad, too.

It’s not that the game is visually violent. Creator Michael Brough ditches the pixel aesthetic of his equally brilliant Glitch Tank ($1.99) and Zaga 33 ($0.99) for a clean, crisp design. Each player’s point area changes hues depending on what color they should combo.

I’ve thought hard about O‘s shortcomings, and I couldn’t find any. I suggested a special win screen if your color combo never breaks, but this condition will rarely occur in practical play. Side note: the developer had to list the game as O. because O was too short.

I really think O should become a global past-time. It evokes pure adrenaline and emotion, while stimulating social interaction. Everyone with an iPad 2 or iPad 3 and a partner to play with should own it. Grab it now while it’s still on sale for $0.99.