Crescent Moon‘s original Ravensword: The Fallen King ($2.99) was a pretty huge landmark title in the short history of iOS gaming. It was a fully 3D action RPG with impressive (at the time) visuals and an expansive world to explore. It was one of those games that made you stop and say “I can’t believe I’m playing this on my phone…"

That was just over 3 years ago when Ravensword hit, and since then Crescent Moon has gone on to become a highly successful publisher as well as developer, putting tons of quality games out on the App Store. They even took the open-world RPG thing to the next level with Aralon: Sword and Shadow (Free) in late 2010, again offering a huge expansive experience in a tiny mobile package. 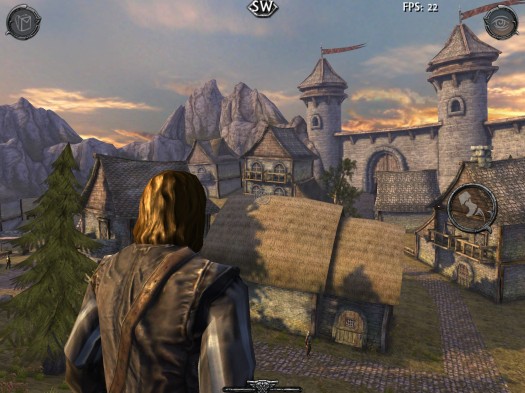 Now, after originally being announced way back in March of 2010, the proper follow-up to Ravensword is finally almost upon us. It’s called Ravensword: Shadowlands officially, and at GDC earlier this year we got to play an extremely early build and really liked what we saw. More recently, a new trailer was released at the beginning of October that looked simply fantastic, and showed how much progress had been made since we saw the game at GDC. Unsurprisingly, Ravensword: Shadowlands rocketed up the most anticipated games list from TouchArcade (Free) app users for that month.

So, after all that backstory and all this time waiting for Ravensword: Shadowlands, I’ve finally got my hot little hands on a mostly completed build, and let me say that fans of the original Ravensword and lovers of action RPGs in general should be in for a treat. Mechanically, they are very similar, and I got that same sense of awe and wonder roaming around its huge environments that I did when I fired up the first Ravensword more than 3 years ago. Like its predecessor did in 2009, Shadowlands looks to push the boundaries of what’s possible on the mobile devices of today. 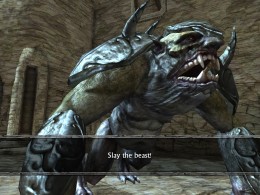 The game starts off thrusting you straight into the action as a soldier embroiled in battle with your enemies the Dark Elves. This opening sequence serves as a tutorial as you’re introduced to movement, aiming, jumping and attack and defense moves. After taking on several groups of archers and swordsman with your AI buddies helping out at your side, you encounter a massive Troll who you must carefully defeat. Shortly thereafter, a huge explosion out of nowhere brings literally everyone around you to the ground, yourself included.

You awake to find yourself in bed with a fair maiden watching over you, not totally unlike the beginning of the original Ravensword. She tells you that during that great battle the strange explosion killed everybody there… except you. Everybody is curious as to why you were the only one spared, including yourself, and thus embarks your journey to find answers in Ravensword: Shadowlands.

From here, you’re pointed in the direction of the local Guild Master who will start you off on a series of “main" story quest, and roaming around the town and talking with its inhabitants can net you some interesting side quests too. Eventually, you can leave the confines of the town walls and explore the vast world of Ravensword: Shadowlands, and it’s been a delight for me to do so thus far. 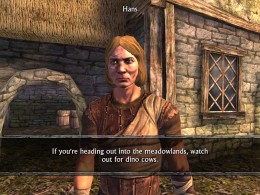 I’ve put just a few hours into the new Ravensword so far, completing several main quests and a couple of side quests, but it’s still very obviously in an in-development state. The framerate can be erratic, though it never drops low enough to impact your playtime and when it does hit that glorious 60 frames mark it’s truly stunning. Glitches, pop-in of long distance terrain, and a few rough bits of environment are present, and totally normal for an in-progress build. I imagine most of these issues will be ironed out before release. Ravensword: Shadowlands, despite its in-progress nature, is still very playable, and most importantly very fun so far. It’s also beautiful, and should really be a showpiece for the platform when it releases.

I’ve been recording my adventures in Ravensword: Shadowlands, and cut down more than an hour of footage into this more-digestible 16 or so minutes. In it you can see me exploring the terrain and marveling at the giant “Dino Cows", traversing through one of the early towns and its beautiful scenery, visiting a camper in the forest, and having my tail handed to me by a group of goblins at their hideout. Of course, I go back and give them what for in a subsequent retry (and from the safety of higher ground). Finally, I visit one of the blacksmith shops in town and outfit the virtual representation of my bearded self with some extra weapons and armor. Enjoy!

Speaking of release, Crescent Moon hoped to have Ravensword: Shadowlands out before Christmas, but with the holiday shutdown coming there’s a slim chance of that happening. However, they should be submitting it in the next couple of weeks, and it will be in Apple’s hands from there, so not too much longer to wait. Until then you can pass the time discussing the game in our forums, and we’ll be sure to bring you any new developments on Ravensword: Shadowlands as we get them.