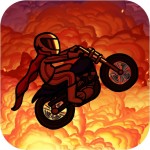 Score-oriented ‘racers’ seem to have a decent following on iOS, with hits such as Mad Skills BMX ($0.99) and MotoHeroz (Free) garnering fans with their emphasis on speed, precision, and high scores. Stunt Star: The Hollywood Years (Free), continues the trend in terms of trial-and-error side scrolling racers. However, while other titles focus entirely on race, Stunt Star does a great job adding personality and presentation with its premise. Sure, Stunt Star’s difficulty is exceedingly tough, and its limited-use power-ups don’t help the matter, but the game’s trick-based gameplay is deep, lengthy and simply fun.

Stunt Star puts you in the role of a prospective stuntman as he gets his start in Hollywood films. Levels are categorized into different films, with each individual mission charging you with performing a specific trick. Players are tasked with getting their vehicle from one point to another in a level, with the goal being to land as close as possible to a checkered flag. Each mission also provides supplemental objectives (typically grabbing a star and using a certain vehicle) which award added points for completion. At the end of each mission players are scored, money is earned, and trophies are awarded based on score. 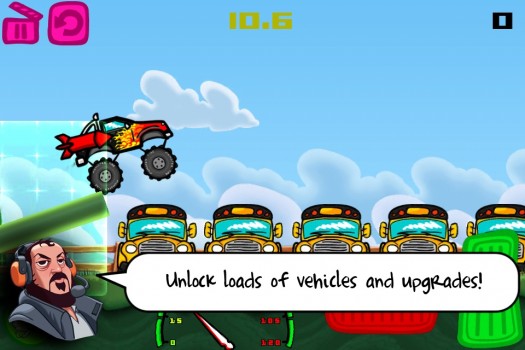 One of Stunt Star’s greatest strengths is its large depth of play. There are a ton of different vehicles to unlock, each with their own attributes in terms of speed, weight, acceleration and more. In addition, there are a wide variety of power-ups that can be used to make level completion easier. Examples include basics such as nitro and a speed parachute to more complicated ones such as added weights to front/back wheels (important when you’re trying to ‘climb’ up ramps). Later levels unlock a parachute for your stuntman which allows you to eject from your vehicle and float to checkpoints.

In addition to the above, Stunt Star adds an extra layer of depth via the ability to ‘draw’ ramps on certain levels. I think this feature adds a lot in terms of flexibility for your goals. Looking to hit all the tricks and get the stars? Draw a complicated ramp and try and hit it with the right vehicle. Trying to just get to the next level? Make a simpler ramp that gets you past the obstacles easily without much in terms of points. Stunt Star also does a great job with balance, as most levels are at least passable without too much effort.

However, not every level is as balanced as I’d like, as some stunts are incredibly difficult and seem to require power-up management just to pass levels, much less to score well in them. When you combine this with the controls (which aren’t as smooth as I’d like) some missions end up as bottlenecks of difficulty. Thankfully, Stunt Star has a quick restart mechanism as some levels may require dozens of restarts  in order to succeed. In addition, the game’s overall presentation and entertaining personality make repeated attempts at least tolerable. While tons of restarts aren’t particularly an issue (especially for lovers of tough games) I was initially a bit more concerned with the finite power-ups.

Power-ups in Stunt Star have their own inventory that track total numbers. Each power-up employed during a run gets consumed, with subsequent purchases requiring credits. As you can imagine, difficult tricks can quickly exhaust supplies of power-ups, which in turn can make you broke quickly if you seem intent on using a certain combo of power-ups for each run. While Stunt Star employs an IAP shop to get you large sums of in-game cash quickly, the game thankfully lets you replay previous missions to earn more cash. In this regard, the IAP shop becomes superfluous in my view, with earning cash becoming less of a deal-breaker and more of a minor frustration.

In some ways, Stunt Star is a difficult game to evaluate. Its challenging gameplay and numerous options in terms of power-ups and vehicles doesn’t make it a particularly approachable game. Yet it’s those exact features that make it a delight for fans of trial-and-error score-chasers. In that regard, assuming you know what you’re getting into, Stunt Star is well worth a recommendation.