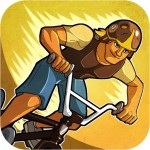 Where Mad Skills BMX really differentiates itself is in the use of a smart new gesture control system that feels much more native to a touch screen than the previous game’s virtual buttons. They work great and feel intuitive, but they don’t necessarily make for an easy game. In fact, Mad Skills BMX is hard as nails.

The pinpoint timing needed to be successful in the game takes a lot of practice to really get to click, and it can be hard to demand that kind of patience from a mobile gaming audience. Once it does click, however, Mad Skills BMX opens up to become a fantastic speed trials game that should resonate quite well with competitive leaderboard chasers. The problem is, you need to be all plugged into Facebook to get in on that fun. 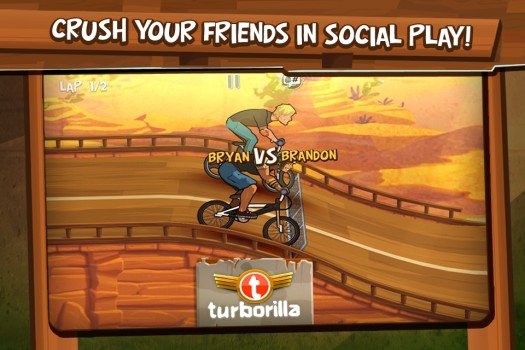 Aside from controls, one other big area where Mad Skills BMX improves over Motocross is in the visuals. It uses more vibrant art and much larger racing avatars, giving the whole game a comic book-ish feel that’s very pleasing on the high resolution iOS screens. It also runs at an ultra-smooth clip, with the same ragdoll character physics found in the first game that provide painful-looking crashes when things don’t end up going your way. 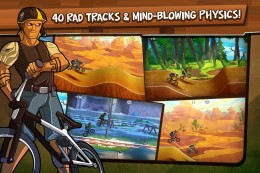 Moving past the slick new look of Mad Skills BMX, the heart of the game lies in the new gesture controls. It’s incredibly simple: hold the left side of the screen to pedal and speed up, use swipe gestures on the right side to lean back and forth and bunny hop (jump). Holding down pops a wheelie on the ground or launches you downward from the air during a jump, both crucial for maintaining speed in the declines of the terrain. You can also lean forward or back in the air to perform flips, which if landed give you a quick burst of adrenaline and speed.

It’s pretty basic stuff trick-wise, but this definitely isn’t a game about tricks. It’s about speed trials, plain and simple. Each course is a deviously planned out set of jumps, mounds, and elevation changes that demand near-perfection to keep your momentum going through them until the end. You know in Tiny Wings ($1.99) when you have a good rhythm going but then you just flat out miss a dive and your momentum comes to a screeching halt, leaving you to slowly and frustratingly try to build your speed back up? Expect to feel a similar thing many times over in Mad Skills BMX.

In fact, Tiny Wings is probably a more apt comparison to Mad Skills BMX than any biking or racing game would be. It’s all about learning the course and riding each nook and cranny exactly right. Doing a wheelie down declines and over mounds for speed, quickly leaning back then forward while launching off a jump to give you that little extra burst, and flipping through the air when possible for performance bonuses are all crucial tactics to learn. 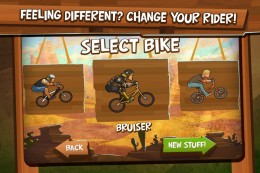 It works though, if you have the dedication and patience for endlessly trying something until you nail it. It also makes for a great competitive game, but this is where I think Mad Skills BMX totally drops the ball. It relies solely on Facebook for online leaderboards, which I just can’t get into. There seems to be a pretty lively competition amongst the people who ARE using Facebook, which is nice and all, but I think this decision severely limits the overall audience this game could have.

Given the heated online competitions that broke out with Mikey Shorts ($1.99) last month, or more recently with the devious Super Hexagon ($2.99), the lack of Game Center for leaderboards is downright painful. I’m dying to know how my scores stand up against others or if I need to spend hours perfecting runs to shave a fraction of a second off to nab a top time. I’m just not willing to blow up my Facebook to find out.

That means that for people like me Mad Skills BMX comes down to its single-player legs, which it still has. The AI player on each level is pretty challenging your first run through the game, and then you can go back and challenge your own best ghost runs on each level to see if you can improve. It’s just fun to learn the intricacies of the courses and find places to shave off bits of time, and it feels amazing to nail a perfect run.

So, this is tough for me. I really, really like Mad Skills BMX, and keeping in mind its challenge and somewhat steep learning curve, I still totally recommend giving it a try. It just feels like I’m missing out on half of the game being on the outside of the Facebook leaderboards. A recent update added 10 new tracks and Game Center achievement support, but sadly no leaderboards. Should those come sometime in the future it’ll really breathe life into Mad Skills BMX for me, but even as it is now it’s been one of my favorite recent single-player experiences and for that is still worth considering.