When it comes to platformers and racers, RedLynx (1000 Heroz, DrawRace 2) knows a thing or two about what makes the genres successful on iOS. The trend continues with MotoHeroz [$0.99 / HD], a time-trial based platforming racer with an emphasis on physics. Sporting refined gameplay elements including a good implementation of asynchronous multiplayer, MotoHeroz does a good job combining genres into an interesting gameplay experience.

Based on the WiiWare game of the same name, MotoHeroz combines the time-trial based platforming elements of previous RedLynx titles with vehicles and upgrade mechanics. Each level pits you in a race against the clock to get to the other end of the map. Some maps offer power-up items ranging from turbo boosts to jetpacks in order to add some variety. Stars and cash are awarded based on your speed. You can then use that cash to upgrade your vehicles, which allows you to earn previously unreachable stars, and so on.

Make no mistake, while the general gameplay sounds simple, MotoHeroz can get quite difficult. This is especially true once you find yourself needing to earn that second or third star to advance to the next world. Players looking to succeed will need to master fine-tuning their jumps and landings in order to squeeze out as much control and speed as possible. The controls add another layer of difficulty on top of the game, as I found it challenging to effectively manage the items and landings. 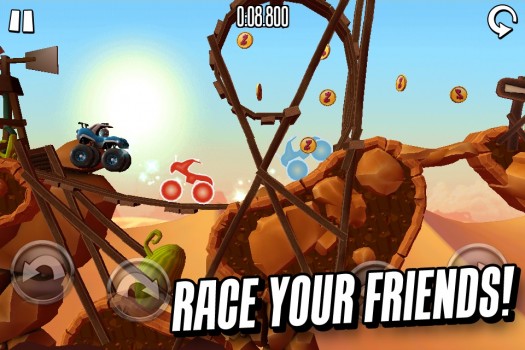 All this leads to a game that involves a lot of trial and error. While veterans of the genre may be used to it, newcomers may be met with frustration. Still, for fans of memorizing tracks and patterns, MotoHeroz is almost as good as it gets. Alternatively, folks can also hunt for treasure chests in each level that bestow a decent amount of cash for upgrades (which make star chasing much easier).

If neither of those actions appeals to you, you can always purchase cash via IAP and pimp out your ride instantly to earn those stars faster. This is one area that MotoHeroz falters somewhat. While it’s theoretically possible to earn enough cash to upgrade your vehicles enough to collect more stars, it can be a fairly lengthy process and is not for the impatient. In this sense, the IAP will certainly prey on a lot of gamers. However, MotoHeroz deserves some credit simply because a viable non-IAP method of advancement does exist. 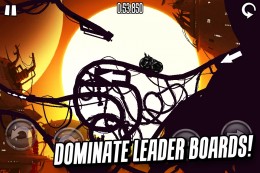 Unfortunately, this version of MotoHeroz is a bit lacking compared to its console cousin. The total number of levels was reduced from 100 to 30. A few other modes (single-player story, multiplayer) were also omitted. However, there’s still enough content for a worthwhile experience, particularly with its asynchronous ghosts and multiplayer leagues.

While MotoHeroz doesn’t have live head-to-head action, the asynchronous multiplayer via racing ghosts is well done and acts as a great substitute. Each level will pit you against a ghost for the next available star, as well as an actual player that raced the track. As you set times in each level, you’ll be matched with player ghosts that are slightly faster than your best time. The ghosts are an important element to the overall success as MotoHeroz as it provides you with continual motivation (as if getting all the stars weren’t enough) to perfect each level.

MotoHeroz also allows you to form ‘Leagues’ that can replace the overall leaderboard, meaning that your racer ghost will be someone from that league. Leagues can be created and joined by any other player (in fact, you can join the ‘Touch Arcade’ league that our forum members have created). It seems like a minor feature, but I found it much more gratifying to actually play against folks you know.

Visuals and overall presentation are areas where MotoHeroz succeeds really well. Environments are detailed, vibrant and do a great job echoing the personality of the vehicle for that region. The framerate is also fast and smooth, which definitely enhances the experience. MotoHeroz even gets the small touches right, such as having an instant restart button for quick do-overs.

Despite the shortcomings in content and difficulty, MotoHeroz is still a great addition to the platform racer genre. While I think the ‘hardcore’ nature of the gameplay will appeal mainly to the hardcore fans, the supplemental league ghosts and leaderboards do a good job of providing additional goals that might appeal to a wider audience. Regardless, fans of platform racers (or previous RedLynx titles) need to check this game out.