In February of 2011 we learned that Daniel Blezek, a programmer and passionate fan of Bungie’s classic Marathon first-person shooters, was bringing the trilogy of games to iOS. Things went quite for a while after that and people started wondering what was up, but several months later it was revealed that Bungie themselves had given the project their blessing.

During the second half of the year, both Marathon (Free) and Marathon 2: Durandal (Free), the first two games in the trilogy, hit the App Store. And the kicker? They were free. But not just that, they also played surprisingly well on the touch screen and offered optional enhancements by way of inexpensive IAP. Yesterday, the classic trilogy finally became complete when Marathon Infinity (Free) launched in the App Store.

If you’re familiar with the iOS incarnations of the first two games, you’ll pretty much know what to expect with Infinity. You get the complete game in standard definition for free, which still looks pretty darn good after all these years, but alternately for $1.99 you can download the high resolution texture pack to take things up a notch. Then there’s a Master Chief mode for 99¢ which will give you tons of cheat options and a level select, an another 99¢ IAP for a variety of different crosshairs. 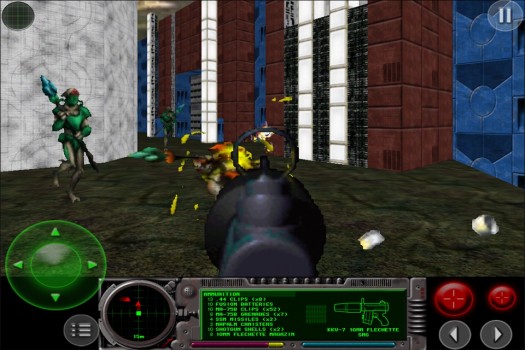 Just to reiterate, you can get the entire Marathon trilogy in Universal form for your iOS devices of choice for the low price of zero. The IAP is non-essential and serves as more of a tip jar to show your appreciation to the developer, but it does offer some interesting extras if you so choose. If you were a fan of Marathon back before Bungie became known for Halo, or if you have an interest in old-school FPS games, then all 3 Marathon games should be a part of your iOS game collection.