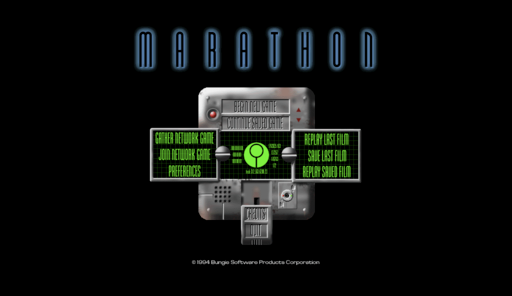 A little less than 20 years ago id Software turned every PC into a gateway to jaw-dropping FPS action with DOOM and DOOM II. These groundbreaking games had Mac owners pretty jealous of all that gory Cacodemon-crushing action. Oh, the Mac did get its ports, but with no low res, high framerate screenmodes, the DOOM experience on the Mac could also be called Tiny Window Carnage. That is, until a little studio called Bungie came along and released their own take on the FPS that took sweet advantage of all those high res pixels on the Mac’s display. It was called Marathon, and just about every gamer with a Mac was hooked.

As Wikipedia describes the game’s backstory,

Marathon takes place in the year 2794 aboard a large, multi-generational colony spacecraft called the UESC (United Earth Space Council) Marathon. The ship was converted from Deimos, one of Mars’ two moons. The plot of the story sets the player as a security officer and focuses around an invasion of the ship and (to a much lesser extent) a colony on the nearby Tau Ceti by hostile extraterrestrials. The plot is primarily revealed through various computer interfaces called terminals, which relay crew logs, maintenance documents, historical accounts, and stories. It is through these terminals as well that the player receives mission information from Leela, the ship’s artificial intelligence, as well as Tycho and Durandal, the science and utilities AI in Marathon respectively.

Well, we all know the Bungie story — Microsoft grabbed ’em, and the most promising Mac-focused game studio ended up on…The Other Side. But, not before releasing the Marathon game engine into the open source community. The engine, known as Aleph One, is based on the Marathon 2 source code and allows modern machines (Macs included) to play through those well-loved Bungie classics, with notable enhancements to boot.

In a thread started a few weeks back in our forums, Daniel Blezek (“vidmaster") revealed that he is working to bring an iPad version of Aleph One to the App Store.


Aleph One for the iPad will feature the following:

The game is currently in beta testing, with a few issues to be worked out before it’s ready for release.

The developer indicates that, if Aleph One for the iPad does well in the App Store, he will likely release an iPhone version of the game, as well.

UPDATE: The iPad version of Aleph One may face some difficulties that we’ve seen discussed in the Pfhorum.com Aleph One forums (“iGuy" = “vidmaster").

First, there is the issue of the distribution of the various Marathon level packs. That is being handled in this app by the download of the actual levels from a remote website on the first launch of the app, which is a technique we’ve seen used (successfully) in the App Store previously. The second issue is the fact that code under a GPL license is not “compatible" with the rights situation of an app that has been submitted to the App Store. We’ll see how this pans out, but suffice it to say there may be rocky shoals ahead for this effort to bring the Marathon trilogy through Aleph One to the App Store.