It was back in February that we first learned about the guerilla porting project of Bungie’s classic Mac first-person shooter trilogy Marathon [Free] to the iPad. Lone wolf coder Daniel Blezek had taken it upon himself to take these games, which were by this time a part of the open source community, and adapt them for the touch screen. But, there were still questions about certain aspects of the open source licensing and whether or not things would jive with Apple’s App Store distribution methods. Silence about the Marathon iPad project in the months that followed hinted that it indeed might have hit a permanent roadblock.

Then just a couple of weeks ago, Bungie posted an interview on their blog with Daniel Blezek talking about the project. It turns out that they had caught wind of Daniel’s planned port and were stoked on it, and decided to officially get behind it. A refreshing turn of events considering some of the unfortunate turnouts of other fan projects like the Streets of Rage Remake or various awesome looking Sonic the Hedgehog games over the years. 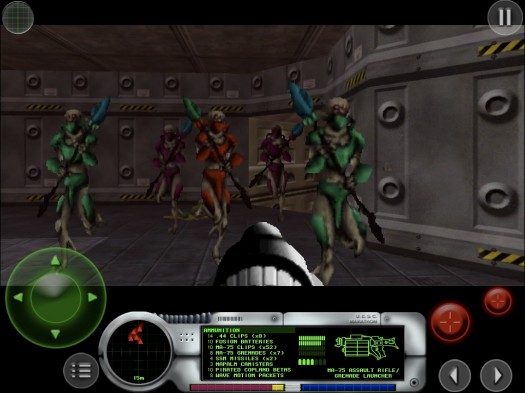 If you’re a fan of Bungie or the Halo series then it may not be surprising that Marathon has launched on July 7th, or otherwise known as Bungie Day. As had already been announced, the game launched for free and comes with the complete first game in the Marathon trilogy, which contains 9 chapters and 27 levels. I’d like to believe that the remaining two games Marathon 2: Durandal and Marathon Infinity will appear on the App Store in similar fashion sometime down the line, though there aren’t any concrete details on this just yet.

The catch to the game being free, if you can even call it a catch, is that the whole game is in a standard texture resolution. Should you feel so inclined, you can download a high resolution texture pack as a $3.99 in-app purchase. The improved visuals admittedly do look nice, but they don’t look that much better than what comes in the game initially. Of course, I wouldn’t blame you one bit if you felt like throwing the four bucks at the game just to support such a great project, and received the slight visual upgrade in return as an added bonus. 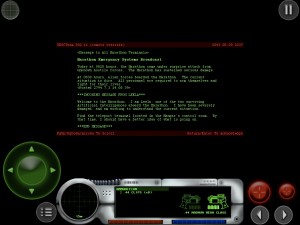 Another interesting in-app purchase is the ability to buy a Master Chief mode for 99¢. What this means is that options for unlocking all weapons, infinite ammo, invincibility, and instant shields are all available in the pause menu at any time, as well as the ability to select any stage and save anywhere during play. The game saves your state when you exit with the home button, but actual game progress is normally only saved at specific checkpoints in each level.

All of these cheats may sound like they’d suck the fun out of the game, and for some people that would be true. But Marathon is a hard game, and its retro gameplay hasn’t aged entirely well. Whereas a game like Doom is more of a straight up blast-a-thon, Marathon contains many (sometimes) confusing puzzles and even relies on some light platforming elements that can be pretty challenging. The option of buying some cheats for a buck is actually a welcome one if you’re just looking to experience the game again with minimal frustration.

The game itself plays pretty well on the iPad’s touch screen. A virtual stick on the left controls your movement and swiping anywhere on the screen controls your aim. Buttons in the lower right control firing and switching weapons, though you can toggle an option to fire by tapping anywhere on the screen too. Opening doors and toggling switches lies right below the virtual stick, as does access to an overhead map. There’s not the fully customizable controls seen in other FPS games, but what’s here works pretty well. 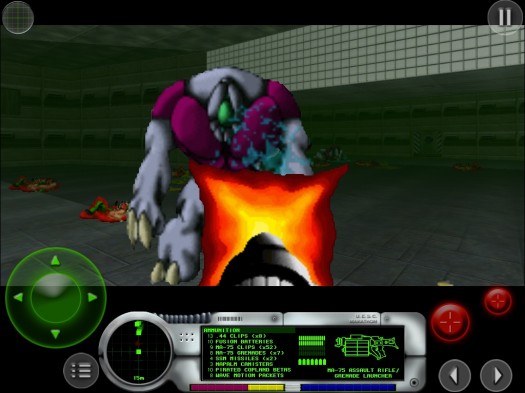 If you like old-school first-person shooters like Doom or Duke Nukem 3D, then you should feel right at home with Marathon. It’s nothing groundbreaking as far as iOS first-person shooters go, but it’s a solid port of a classic game. Marathon tells an interesting story via the computer terminals spread throughout the game, and has a great moody atmosphere. Whether you’re new to the series or an old-school Mac gamer looking for a nostalgia fix, Marathon is an easy recommendation for free and is definitely worth considering the IAP upgrades for the total experience. You can drop your own opinions of Marathon in our forums, and we’ll keep an eye out for news on the release of the remainder of the trilogy.