In March of 2009, id Software released the grandfather of all first-person shooters, their 1992 classic Wolfenstein 3D ($1.99), to the App Store. Besides being a piece of gaming history that you could fit snugly into your pocket, Wolf 3D was also noteworthy for having the most usable touch screen controls for an FPS seen thus far on iOS.

Not long after its initial release, Wolfenstein 3D on iOS received a huge update that added in all of the Spear of Destiny expansion pack levels as well as the ability to load custom levels into the game. Then last summer, another sweet update hit that added Universal and Retina Display support to the game, and it played fantastically on the large screen of the iPad. 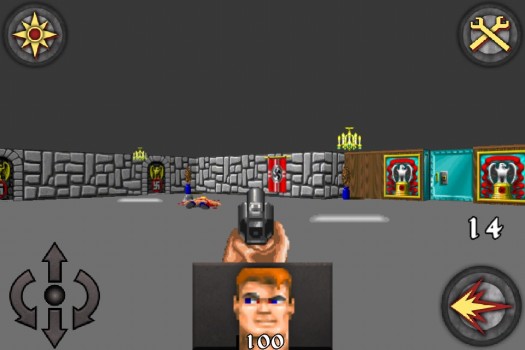 Now for the first time ever id Software is offering Wolfenstein 3D Classic on iOS for free, most likely to celebrate its 20th anniversary. If you’ve somehow never got around to picking up Wolf 3D on the App Store, now is your chance to strike, as the game is an absolute classic that plays wonderfully on iOS and must be experienced.

I have a sneaking suspicion we’ll be hearing more iOS plans from id when QuakeCon gets rolling in August – I refuse to give up hope on the long-awaited iOS versions of Quake and Doom II – but until then make sure you don’t miss out on grabbing the grandfather of FPS on iOS while free.