Telltale’s offerings have been received rather frigidly of late, especially after we called Jurassic Park “technically messy" and “poorly optimized." I’m happy to report, then, that “Ice Station Santa" — the first of five episodes in Sam & Max Beyond Time & Space [$4.99] — is a solid iOS port of the 2007 point-and-click.

To wit: in the four or so hours it takes to beat the game, I didn’t experience any crashes, frame rate drops, or audio stutters. “Ice Station Santa" runs smoothly and stably, and Telltale’s newfound technical prowess is matched with a great touch interface.

Unlike, say, the Hector series, Sam & Max Beyond Time & Space is in three dimensions, and Sam is controlled with a virtual analog stick. A two-finger pinch highlights all the click-able objects in a given area, and the game’s touch implementation is remarkably precise, even when there are dozens of items on the screen to interact with. 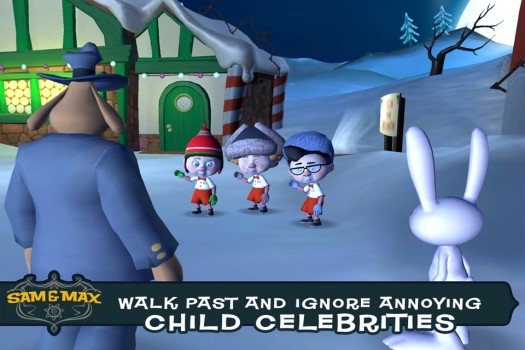 And good thing, too, as “Ice Station Santa" is relatively dense when it comes to screen real estate. Because there are only a handful of areas for the Freelance Police to explore, every little piece of information and every relevant inventory item is crammed into a few screens.

I really like the limited scope of smaller games like “Ice Station Santa" because it reduces the amount of aimless wandering and backtracking, without sacrificing Telltale’s ability to cram humor and detail into each nook and cranny of Sam and Max’ office, Boscoe’s Inconvenience Store, or Stinky’s Diner. 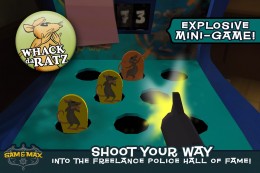 Sam & Max is at its best when players know what they need to do, but don’t know how to achieve it. It’s appropriate that, in a game ostensibly devoted to two anthropomorphic detectives, the real bones of “Ice Station Santa" involve talking to different characters and gathering clues.

Don’t get me wrong, the mechanics are still well entrenched in the traditions of inventory management, but players who  explore the dialog trees and pay attention to the peripheral, world-building details will have more luck than those who throw items at puzzles until they stick.

“Ice Station Santa" is efficiently designed, and one of its great joys is solving the last piece of a puzzle that sets off a larger chain. These little nests of puzzles give the entire game a smooth rhythm and tight pacing. Playing Sam & Max is more like setting off a row of dominoes than chipping away at some insurmountable problem. 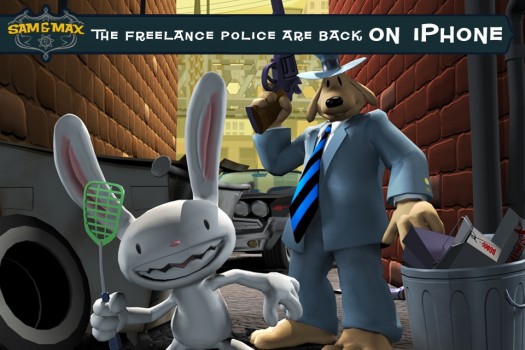 Telltale’s efficiency inexplicably gives way in “Ice Station Santa"‘s two mini-games. They’re not particularly well integrated to touch controls (the arcade-style driving game is particularly clumsy), and — no matter the platform — they don’t contribute much to the overall design. “Ice Station Santa" is short, sure, but it doesn’t have to be padded or broken up by a low-rent game of Punch-Out!!

It’s a minor sin, though. Your mileage may vary with Steve Purcell’s brand of absurdist humor, but “Ice Station Santa" is a solid port of a well-designed, compact adventure game. The user interface touches for iOS aren’t necessarily a big deal, but they present enough care and attention to detail to salvage some of the goodwill Telltale lost with games like Jurassic Park. Sam & Max is a breed apart from point-and-clicks like Machinarium, but adventure games never go out of style — just ask Kickstarter.