Jurassic Park: The Game 1 HD [$6.99] is a mixed bag. On one hand, it’s a technically messy and poorly optimized iPad 2 exclusive. It stutters and drops frames so consistently that it becomes nearly impossible to enjoy, no less play. And even when you’re willing to forgive this fairly fundamental flaw, the roller-coaster-y placement of its sluggish and mundane puzzles has a habit of obliterating the tension it succeeds in building. But on the other hand, this is a Telltale production. The characters, which are newcomers to the universe, are handled with care and written as if they were, actually, people; the story is laced with excitement and drama conveyed with a palpable reverence for the source material; and when the game is actually clicking, the tension and the pull of its beats are enormous.

The story takes place in Jurassic Park sans electrical fences — basically, right after Dr. Hammond, Malcolm and the rest of the crew bail on Isla Nublar and its new occupying force, dinosaurs. You’ll be following a new cast of characters, including a well-equipped … contractor lady sent in to assist Nedry with his capture of the dinosaur embryos, a veterinarian, and the vet’s daughter, who obviously has some issues with her family life.

Probably the coolest thing about the game is how hard the world hits you in the jaw. It is the place you remember from the movie, right down to the signs, Jeeps, and specific audio. I also love the fan service Telltale throws in; the Mr. DNA callback in the middle of a T-Rex fight is probably the most awesomely absurd of the bunch, but you’ll also hear talk of Muldoon and Hammond from a new perspective.

This isn’t your typical Telltale adventure game, by the way. It’s much more focused on cinematics than usual and you never directly control the people the story is focusing on. The puzzle segments, for example, are simple search and find dalliances — just point, click, and watch the characters interact. This never bothered me. The lack of control bolsters an overall cinematic purpose, as the core of the best mechanical action of Jurassic Park: The Game hinges on some insanely harrowing interactive scenes featuring plenty of dinosaurs. 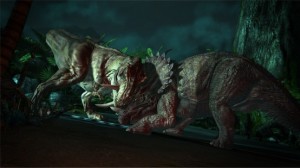 These scenes, mechanically, are pretty similar to what you might have seen in Heavy Rain: you’ll be presented with a fast-flowing scenario, and you’ll need to hit a bunch of contextual prompts to replicate what a character goes through in a scene.

In Jurassic Park, for example, you’ll need to rub, push, and pull on certain spots on the screen to hurdle through the jungle of an exhibit as spitting dinosaurs chase you, or, a little bit later, avoid a T-Rex as he hulks out on the cast. I’m not the biggest fan of these kinds of games in general, but I did find some fun with Telltale’s scenes, and mainly because of the effective tension. Telltale absolutely nails the drama and emotion of being confronted by a house-sized lizard. Also, the repercussion for screwing up in a scene is always death, so there’s a reason to be on your game.

The bummer with the game in general is that each of these heart-pumping sequences are sandwiched by much more laid back and fairly easy puzzle sections. They feel sluggish in comparison and just don’t gel well with everything else the game offers.

But there’s bigger problems with the iPad 2 version of Jurassic Park: The Game: it’s on the borderline of unplayable due to a myriad of technical issues. We don’t recommend that you bother with it, actually, despite the fact that this game delivers on a lot of different levels. On the Mac or PC, though? Check it out.

NOTE: Screenshots from other, much higher-resolution versions of the Jurassic Park: The Game. Also, we finished the first episode on a Mac after tiring of the iPad 2 version’s clunkiness.