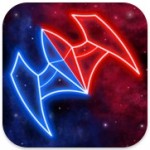 FlipShip [99¢/Lite] from ByteSize Games is a 2D dodge and shoot’em-up game, which at first glance seems to resemble a bunch of other titles, like Tilt to Live [$2.99/Lite/HD], Geometry Wars [99¢], Hyperlight [$1.99] and Infinity Field [99¢/HD].  However, once you start playing it’s immediately apparent that FlipShip features some interesting ideas, adding a strategic element which differentiates it nicely from those other games.

In FlipShip, your craft is maneuvered using tilt controls and automatically fires when an enemy is within range, so there’s no fire button. Where it differs from your typical shooter is that the color of your spaceship is important, because you can only destroy enemies the same color as yourself. This is reminiscent of the color-based Japanese shoot’em-up Ikaruga from 2001. For example, if your ship is red, you can destroy any red enemies, but you’d better be careful to avoid the blues.  Over time more and more of the different-color enemies appear, making them increasingly difficult to avoid.

At any time you can tap the screen to “flip" the color of your ship. That’s right, the title of this game – FlipShip – actually refers to “flipping the color", not flipping the spaceship over. So now, suddenly your spaceship has turned blue. This means you’re now hunting the masses of blue enemies which have built up and avoiding the red ones, basically the exact opposite of before. 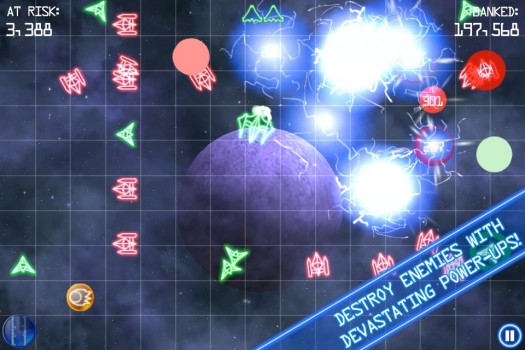 At this point, things get a little strategic. You could simply keep changing colors, depending on what’s close. But, each time you kill a same-color enemy your combo points are increased, and these combos ramp up pretty quickly, so there’s a big incentive to remain one color as long as possible to achieve massive combo points. If you play it safe and change colors, your combo point value is immediately reset. Although, if you wait too long you may get trapped by the growing number of different-color enemies and die. Choosing when to flip becomes a key part of this game.

After you’ve been playing for a while and destroyed masses of same-color enemies to earn an insane combo-point value, you’ll probably expect to have a huge score …BUT…  you won’t.  You see, your points don’t actually count until you “bank" them, by flipping your color.  If you die without flipping color, you lose all your precious combo-points and score nothing. 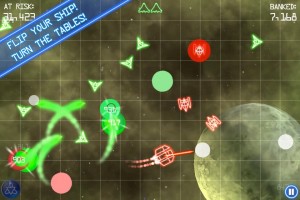 This creates a constant strategic dilemma – do you keep hunting the same-color enemies to increase your massive combo-score, or do you feel threatened by the growing number of enemies to avoid, and flip color to safely bank the combo points so they’re not at risk?  This simple mechanism elevates this game from a regular arcade shooter into a much more strategic affair.

I’m not a huge fan of tilt controls, but after configuring the tilting in the options, it worked perfectly, allowing the craft to precisely dodge and weave around enemies, squeezing through tight gaps to collect power-ups such as slow-motion, bubble-shield, packs of homing missiles and electrical bursts.

There’s three spaceships to choose from, each with different speed, weapon range and a unique special ability which is triggered by tapping the power meter once it’s filled by destroying enemies.  There’s six levels of difficulty, ranging from ‘very easy’ to ‘insane’, each with a Game Center leaderboard, although some users report there’s little difference between some of the difficulty levels and no need for so many.

Flipship‘s neon vector-style graphics are not as flashy, exciting and high-energy as Infinity Field, and there’s not a huge amount of variety in the gameplay with just one game mode. However, the strategic color flipping concept works really well, the controls are totally responsive and people are enjoying it in our forums.

The next update will make the game Universal and is already with Apple for release shortly, plus there’s a free lite version if you’re curious. Playing this game may even tell you something about your own character. How confident and greedy are you – will you gamble for the high score, or flip?