We last covered Forze Field’s take on Geometry Wars earlier this year when it was released as an iPad-only title. While we certainly enjoyed the fresh perspective that Infinity Field [$0.99/HD] brought in terms of gameplay and enemies, we felt that the art style just didn’t offer any variety or spark on the iPad. Now that the game has arrived on both the iPhone and iPod Touch, does it fare any better? If you happen to have a retina-display device, then yes. Otherwise, expect a mostly intact version of the original iPad title.

Forze Field has done a good job preserving all the various gameplay modes that are available in the HD version of Infinity Field. All six survival modes (‘Zombie’ and ‘Insane’ being my favorites) return in this version, along with the full campaign mode complete with star rankings and power-up shop. Unlike the iPad version, multiplayer is not offered in this non-HD version of Infinity Field, although that seems obvious considering the lack of screen space needed to have two players use the same device. Make no mistake – this is essentially the same game as the HD version, and the majority of the gameplay comments we made in our previous review still stand. 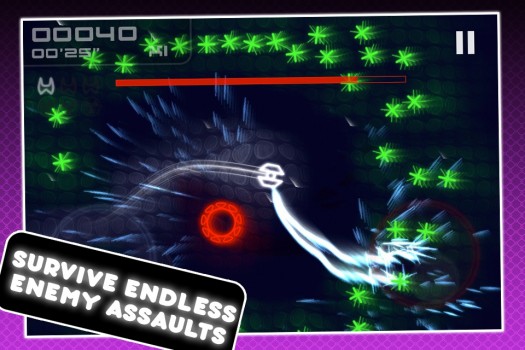 The most significant improvement in this version of Infinity Field is the inclusion of Retina-display graphics.  The higher resolution assets just seem to pop out more at you, especially when you’re playing the game in one of the ‘3D’ views offered in the options. Also, the particle effects look just as good if not better than the iPad version. There’s very little slow-down as well, even when your ship is completely powered up and spewing out so many shots you can barely make out the enemies. Still, the game’s visuals derive greatly from Geometry Wars, so if you’re hoping for some creativity, you won’t find it here.

One of Infinity Field’s downfalls in making the transition to the small screen is its dual stick controls. Personally, I think the controls handle better simply because the position of your hands on an iPhone allow for greater precision than when using the iPad. However, because the screen is so small, your hands do cover up a decent portion of the action. Depending on the view you’re playing in, this could lead to a definite disadvantage, especially when the action starts getting hectic. Unfortunately, this is simply one of the tradeoffs to using on-screen dual-stick controls on a small device. Still, I didn’t find the controls too frustrating as long as you stay on your toes.

If you don’t have an iPad and are looking for a good dual-stick shooter in the same vein as Geometry Wars, look no further than Infinity Field. If you have both an iPad and an iPhone/iPod touch, then your choice becomes a bit more difficult. Unless you plan on utilizing multiplayer, I’d probably stick with this version of Infinity Field as its retina graphics offer a marked improvement. Regardless of which you pick, I doubt you’ll be disappointed if the reception in our forums is any indication.