Simply put, Rescue City [Free] is a worthy addition to the line-drawing genre that has long since been dominated by the prowess of Flight Control. Rather than directly mimicking the open-world environment of the flight-landing title, Rescue City succeeds at implementing a more structured approach to vehicle management that not only still requires strategy and management, but also manages to simplify the core gameplay experience.  A tough difficulty curve and a lack of variety in environments are the only significant obstacles that hold Rescue City back.

Rescue City places you in charge of the police, firefighter, and ambulance services for a section of a city. As various incidents pop up, you must dispatch the appropriate emergency services by drawing a route to the location. Each incident has a countdown timer attached to it, and the game ends if you do not respond to the incident in time. In addition, the game also ends if any of your vehicles collide with each other while on the road.  Obviously, the crux of the gameplay becomes effective route management as you will be trying to respond to each incident as fast as possible while preventing any vehicle crashes. 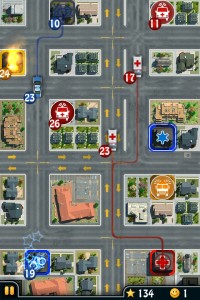 As mentioned above, veterans of Flight Control will feel right at home with the gameplay and control scheme of Rescue City. However, Rescue City has some important gameplay tweaks that lead to a somewhat different experience. For example, the cityscape environment of Rescue City means that your line-drawing escapades will be restricted to the available streets, rather than the unlimited possibilities of sky navigation.

In addition, each service has different dispatch methods and vehicle stats, which add further depth to the game. For example, the ambulance incident begins at the location of need, and your job is to always guide the ambulance back to the hospital. The fire truck, meanwhile, always begins at the station and must be guided to the fire (and is much slower than the other vehicles). The police dispatch is the most interesting element: initial dispatch begins at the police station, but the car can resolve multiple police incidents without needing to return to the station. However, the police car gets its own timer, which must be reset periodically by returning to the station (and yes, the game will end if you don’t get your car back in time). The different vehicles are definitely what set Rescue City apart from other line-drawing games, and I think it’s a well-done addition to a genre that’s characterized as being full of stagnant clones.

Rescue City falters somewhat with its environment variety as well as its tough difficulty curve. Rescue City does do a good job introducing all the core elements in the first few levels, but it seems as if the difficulty gets turned up significantly once the tutorial period is over. Personally, I don’t have a problem with the difficulty (in fact, I thought it was a refreshing change of pace), but I imagine that some casual gamers may become quickly frustrated with progression. If you are one of those folks, the easiest way to succeed in Rescue City is to play the mission several times, memorize the locations of the initial emergencies (each level is fixed in that regard), and use the extra time to formulate additional strategies. 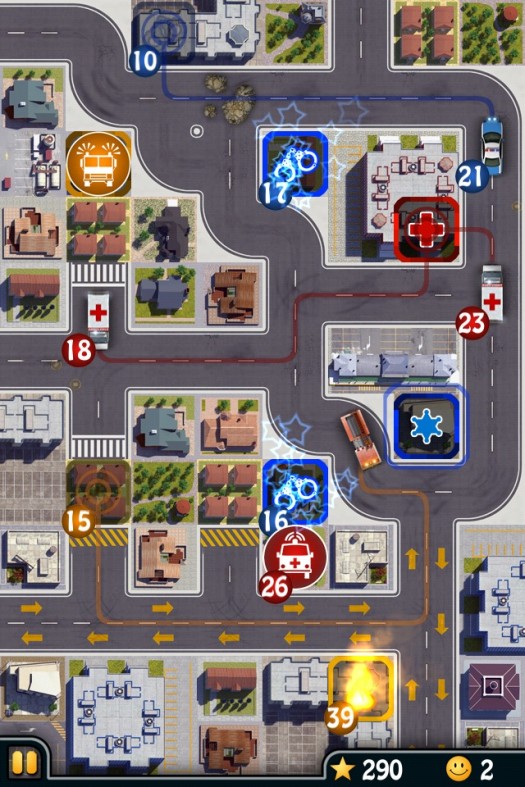 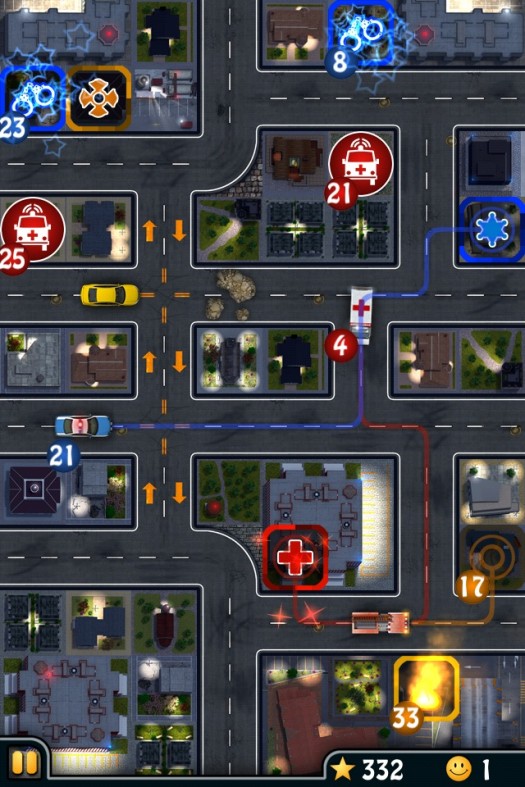 One other issue with Rescue City lies in its lack of variety in city settings. The overall game is divided into three cities with different graphic styles. However, within each city, maps get reused several times, which can make the game a bit drab and repetitive. More unique maps within each city would have gone a long way towards fixing this issue.  Also, while Rescue City scores each mission upon completion, it would have been nice if the game provided some sort of ranking system and leaderboard, as this would aid in potential replayability. Currently, once you finish all the missions, you really have no reason to return.

At its heart, even with the nice additions to the gameplay, Rescue City is still a pretty simplistic game (as are most line-drawing titles). As such, gamers looking for a particularly complicated or deep experience probably won’t find that here. However, casual gamers looking for a well-done take on the strategic line-drawing game should definitely check out Rescue City – especially since the first fifteen missions are free (the rest of the game can be unlocked as an IAP for $0.99).