If you’re constantly disappointed by the knockoffs, cash-ins and “me-toos" of the App Store, then Nicolai Troshinsky‘s Loop Raccord [$2.99] is the game for you. Best described as a game of video editing, it’s strikingly original, much like another iOS game Nicolai designed called UFO on Tape [99¢]. On PC, it’s been a finalist at the Independent Games Festival and at IndiCade and was featured at the Experimental Gameplay Sessions at GDC. And now it’s available on your iPad.

Loop Raccord is all about motion. In playing, you’ll queue short video clips so that the motion of one flows into the other — a raccord, by the game’s terminology. In one clip, a letter might be dropped on the ground. In a clip below, a finger will stroke a hairbrush. It’s your job to line those motions up so the finger begins its movement the moment the letter hits the ground, creating a chain reaction of sorts. It’s strange and slightly cerebral, but also very compelling.

Don’t be scared off by the “experimental" label. Loop Raccord is very much a game, one with all the motivational nudges we’re used to. Scores and achievements are tracked with Game Center. Multitasking support seems to be missing, however, so beware of closing the game midway. 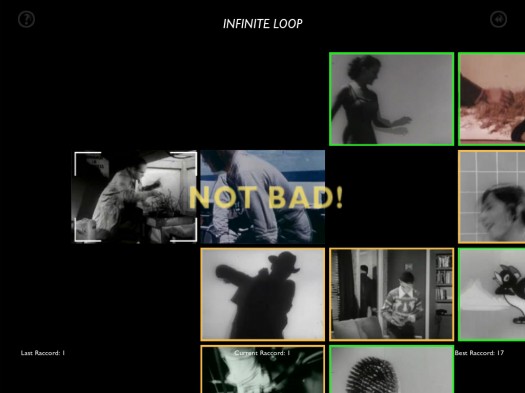 There are three game modes: Single Loop, Double Loop and Infinite Loop. In Single Loop, you’re tasked with creating a single chain of clips flowing from one to another. You’re scored on how accurately you can chain the clips, and how many tries it takes you. Double Loop is the same, but pits two local players against each other on either side of the device.

Infinite Loop is a bit different. In creating an endless raccord, you’re scored only for the ones you get right on the first try. A high score in Infinite Loop is based off how many of those single swipes you can chain in a row. It’s a tense mode, but one that allows you to keep trying for as long as you’d like.

Controlling the clips is quite simple – swipe left to travel backwards through a clip’s frames, and right to travel forward. The clip will play from the moment you lift your finger. If you’ve successfully connected it to its predecessor you’ll earn a ranking for accuracy and be able to move to the next. If not, you’ll be informed if you’re at least close to the correct solution.

The experience isn’t without a few hitches. The clips are largely well-chosen, pulled from Archive.org‘s massive collection. But a few are just a bit too ambiguous, with multiple motions that could fit the requirements. It’s best to play Single Loop until you’ve seen most of the clips, so you’re not surprised mid-combo in Infinite Loop. The interface is also a bit confusing, especially when you complete a Single Loop without any feedback to indicate you’re done.

Then there’s the sound issue. Each clip still contains its audio. As you chain more and more clips the sound layers become increasingly complex until you hear little more than noise. It’s a cool effect at first, but it can get seriously stressful. I can’t play more than a few minutes with the sound on without getting anxious, so you might find the mute switch needs to be applied liberally.

But that aside, Loop Raccord is a game worth experiencing. I’ve never played anything like it. In some ways a successful loop feels like a Rube Goldberg machine, where the momentum from one clip launches the next, over and over ad infinitum. But it’s a machine built of strange and wonderful video clips. For that alone, I’d recommend taking a look.