Last month we posted a short preview of the upcoming GoatUp [link] (then to be called Goat Goes Up) from ungulate adoring game developer Jeff Minter. GoatUp is a retro-inspired platform game — Llamasoft’s first ever, in fact — and is a title I’ve spent a great deal of time with over the last week or so. The game has just gone live in the App Store, so let’s take a look.

GoatUp is a platform game of the endless climber sort that, according to Minter, draws inspiration from several oldschool platformers, including the Atari 2600 title Man Goes Down, Nebulus / Tower Toppler, and Rainbow Island. The game puts you in control of a cute little nanny goat faced with a never-ending, downward scrolling tower bristling with platforms. Your job is to climb as high as you can by deftly jumping from platform to platform as they scroll off the bottom of the screen. It’s a mechanic that’s pretty well represented in the App Store, but GoatUp is full of twists (so to speak) that make it something special. 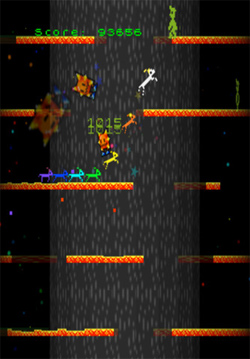 You start the game off at the bottom of the tower in a zone of grassy platforms. As you run back and forth, making your way up the ever-scrolling tower, you eat the grass and reveal eclectic arrays of bonus items that, once found, can be picked up for points — the higher up the tower, the more points per item. Every so often you’ll encounter an amorous billy goat who you can “kiss" to start your belly growing. A bit more grass consumed and it’s – plunk – time for congoatulations, mommy goat! Your new little kid follows along right behind you as you do your thing on the platforms. Kiss lots of billy goats to build up a chain of kids that follow you around like a tail and help pick up bonus items and power-ups, gain more points, and knock off the baddies wandering the platforms a little higher up.

Like most of Minter’s games, GoatUp bundles up a focused style of gameplay, trippy visuals (watch out for the poison mushrooms!) and a pixellated retro style that, together, evoke a sense of arcade gaming as it once was. This latest from Llamasoft, however, takes the stroll down memory lane to another level, thanks to the particular designs of the various zones you encounter in ascending the tower. After the grassy zone, you find yourself moving through a progression of zones with platforms and baddies styled after various well loved games of days gone by (as rendered on the ZX Spectrum), such as Miner 2049er, Manic Miner and Canyon Climber (whence came your goat). And, with the various platform styles come different platform behaviors. Remember Manic Miner‘s disintegrating floors? That’s what we’re talking about here. Conveyor belts, too.

GoatUp is a universal app that runs natively on both the iPhone and iPad. It features mirrored swipe / tap goat control, as well as a tilt option well suited to the smaller devices. Just after the game was submitted to the App Store, the developer added (and demonstrated) iCade support, which should arrive in an update soon. Both OpenFeint and Game Center are integrated to track scores and keep things competitive.

At a glance, and especially in static screenshots, GoatUp might look fairly dismissible given the plethora of endless climbing games in the App Store. The large number of unique elements that mix up the gameplay along with the progressive variation that the heights of the tower bring, however, really set this game apart. Now, that’s not to say that it’s without fault — some lively background music would be a nice addition, and the storm of nostalgic icons flying about might seem a shade, well, confusing to the uninitiated. Even so, in the week I’ve been evaluating GoatUp, it’s grabbed as many (and “many" is the word) hours of my time as has a certain other game involving a little fellow wearing a jetpack. That “just one more game" draw is in full effect, here.

I have long counted Jeff Minter’s Minotaur Rescue [link] and Minotron: 2011 [link] as two of the very best games in the App Store, and I can tell you that GoatUp solidly lives up to the greatness of those titles. It’s quite a different sort of game, but the pieces come together just as nicely.