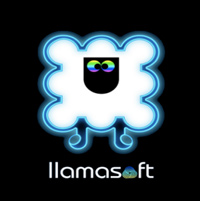 Last December we reported that legendary, long-time game developer Jeff Minter of Llamasoft had fixed his sights on the iPhone, adding it to the extensive list of platforms for which he has developed games over the past 30+ years. We recently checked back in with Jeff to see how things are coming along and were pleased to hear that his first App Store release is just weeks away.

At the time of our previous post, Jeff was working on a Time Pilot-style, tilt-controlled multidirectional shooter which was serving as a testbed for the general iPhone game engine he was in the process of putting together. Since that time, he has taken his impressive Neon “light synthesizer" engine, which powers the XBOX 360’s music visualizer and excellent Space Giraffe title, and taken it to the next level in the form of the new Neon 2 engine for iOS. 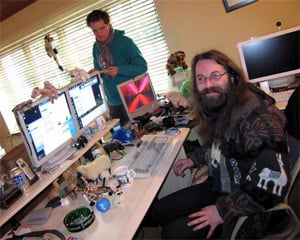 According to Jeff, Neon 2 is much improved as compared to the original, featuring a much cleaner framework and a lot more bang-for-the-buck in terms of shader usage. (Neon 2 exists for the PC and soon the Mac as well, so let’s cross our fingers for Mac App Store goodness from Llamasoft.) And, it is upon this new engine that Solar Minotaur Rescue Frenzy, Llamasoft’s first iPhone game release, has been built.

Solar Minotaur Rescue Frenzy can be succinctly and quite accurately described as: Asteroids meets Spacewar! on an Atari VCS. With minotaurs. While seeing trails. I could really stop there, as far as the game’s description. Of course, the drippy trails part is pretty standard for Llamasoft games, but the minotaur element — that’s a new twist. (It’s usually llamas or giraffes.) But, I’ll share a bit more detail in the interest of thoroughness.

The game, which is a Universal app that natively supports both the iPhone and the iPad, consists of an active starfield play area with a sun at the center. In its core gameplay mode, you control an ever-firing ship that can fly about this starfield (wrapping at the edges) and is affected by the intense gravitational pull of the aforementioned sun. And so, too, are the asteroids closing in from the edges. Your job is to blast apart these asteroids (as opposed to slamming into them), some of which contain minotaurs that must be rescued before they drift into the sun. If too many asteroids drift into the sun, it will turn into a black hole…which is bad. The closer to the sun a minotaur gets before you rescue him, the more points you gain for said rescue. And, the more minotaurs you rescue and the closer you are to the sun, the faster your auto-fire tosses out rounds. Just to keep you fully on your toes, the occasional enemy saucer passes through (and some are tiny), shooting at you and dropping mines.

A touch-anywhere control pad puts you in the pilot’s seat, with perpetual auto-fire engaged, as mentioned previously. 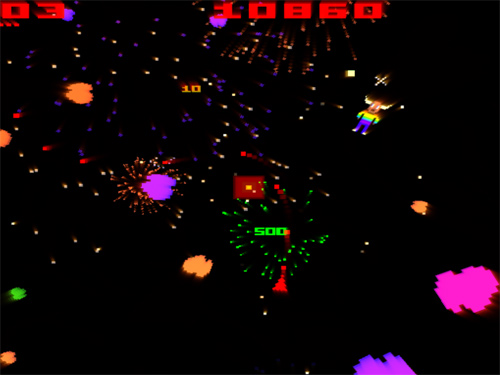 In addition to the core gameplay mode, Minotaur Rescue features three other playmodes, as well. There’s Deep Space Minotaur Madness which is like the above, but with only the Asteroids elements in place (plus minotaurs) — no sun and associated gravity. And, perhaps oddly, there’s also the Tanks! and Jets! modes, which are like the simple, core playmodes of the pack-in Atari VCS cartridge Combat. But, of course, with minotaurs to pick up along the way. 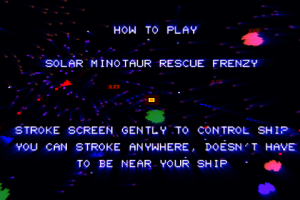 I’ve spent quite a bit of time with the ad hoc build Jeff provided us and have been loving it. But that’s in solo play. The iPhone version also offers a two-player mode (on the same device) while the iPad version allows four people to get in on the action at once. If only I had four friends.

As mentioned previously, graphically, everything looks (and sounds) like an Atari VCS game. And that’s by design. In fact, Jeff has rather strong feelings about the modern-retro aesthetic, and had this (and a lot more, actually) to say about it in the game’s About screens.

The goal of the Minotaur project is to make new games in the style of the old hardware, but with none of the limitations of the original platforms and a thoroughly modern heart inside giving gameplay sufficiently rewarding and involving for today’s players.

We’ve begun in the VCS-era and this first game is presented on the entirely fictional ‘Ataurus TVC 2605’ which uses primitive graphics shapes but allows for an effectively unlimited number of them on screen, and also for some fullscreen feedback effects. Things that would have been entirely impossible back in the day.

The fact that so many games try to look like Geometry Wars, a game whose look was designed specifically to evoke the sparsely abstract games of old vector systems, shows that there is still a desire of players to play once more in that pure, symbolic space, deliberately far from any though of realism. 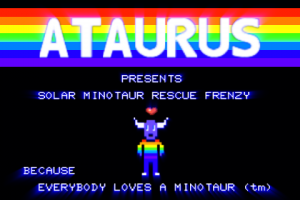 As suggested, Llamasoft’s intention is to develop and release numerous titles featuring retro gameplay, progressing forward from the Atari VCS aesthetic to the VIC 20, Commodore 64, and beyond. Future games would be based on the Neon 2 engine, as well, but offer perhaps more dynamic graphical effects, as Jeff indicates that they took it fairly easy on the eye-candy in this first iOS release out the gate. A forthcoming iPhone 4-specific, Neon 2-based “toy" that Llamasoft will shortly be releasing will go a long way towards showing us what this new visualization engine is capable of. It’s all basically a dream come true for retro junkies like myself.

Have a look at Jeff demonstrating Solar Minotaur Rescue Frenzy on an iPad, an iPhone, and a big-screen PC in an interview with Retro Gamer magazine’s Darran Jones.

The developer indicates that there’s about a week of work left before Minotaur Rescue gets submitted to Apple. In that time, online leaderboards will be added and there’s a chance that a one-ship survival mode will make its way into the game. Minotaur Rescue should be available for download just about at the turn of the year.

Now, while what I’ve presented here is a somewhat longwinded song of praise for Llamasoft’s first iPhone release, it’s true that it will certainly hold the most appeal to those who can appreciate the retro aesthetic. And that’s well worth noting. But, I would encourage causal gamers who may be curious as to why I would run on so about a game that looks 30 years old to try and appreciate what the developer was going for in designing this title. There is a purity and a distillation of enjoyable gameplay to be found here and I expect to find the same in the forthcoming iOS titles we should be seeing from Jeff Minter in the coming months.

And, as for the Time Pilot-like game we saw demoed a year ago? A Neon 2-based rework of it should be among the coming Llamasoft titles. Stay tuned.