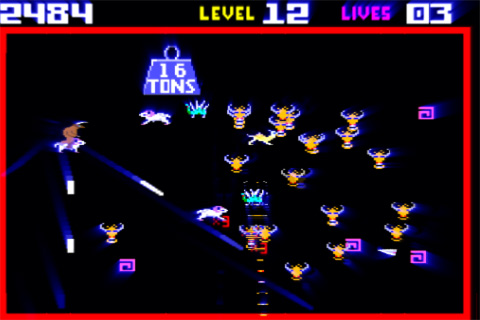 Early last month, noted gamemaker Jeff Minter released Solar Minotaur Rescue Frenzy [App Store], the first title in his Minotaur Project, an effort to release a series of new games in the style of the hardware of days long past, but without any of the limitations of the original platforms. Over the past weeks we’ve noted with anticipation (and some fear) Jeff’s tweets, providing hints at the progress of the second game in this effort — at least, we seriously hope that’s what all those tweets were about… In any case, Jeff has just given us the best hint of all: an exclusive preview build of the game, known as Minotron: 2112, which turns out to be an enhanced iPhone / iPad (universal) remake of his 1991 shooter Llamatron: 2112.

Llamatron, which was originally released as shareware for the Atari ST, was a shooter inspired by Eugene Jarvis’ Robotron: 2084. The game plays more or less like a single-stick version of Robotron — wander about the playfield shooting baddies and not getting killed, but you’re a llama instead of a superhuman and its beasties instead of helpless civilians you’re rescuing. Minotron plays basically the same, but this time around, you’re a minotaur, and things have gone dual (virtual) stick, so what you get feels a whole lot like Robotron, but on acid (which is a phrase that could be used to describe a great many of Jeff’s creations).

Minotron offers four modes of play: Normal, which is the standard “dual stick" mode with lots of power-ups to be had; Assisted, where you are assisted by an indestructible helper droid and less power-ups are available; Simplified, where the player only has to move and avoid being killed, aiming and firing are automatic; and Hard, where only the power-ups from the original Llamatron are available.

The game’s control system features temporally separated movement and aiming touches; the first thumb to contact the screen becomes the movement thumb, and the second becomes the aiming thumb, which provides a nice bit of control flexibility. (The developer suggests players may find that the use of an occasional swipe to alter the firing direction, as opposed to a constant touch to the “stick," is the better way to go and minimizes thumb obscuring screen.) And, in any playmode, the trippy visuals provided by Llamasoft’s new Neon 2 engine are in full effect, as is the amusing cacophony of explosions, blasts, and bleats.

See our brief gameplay video of just the first few levels of the game.

As mentioned previously, the game is not quite finished; Jeff indicates that about a week or two’s worth of finishing touches — level balance tweaks, new enemy graphics, leaderboards and achievements, etc. — should get it in order for submission to the App Store. And when Minotron: 2112 lands, unless one of the last minute tweaks is to scrape off all the awesome that’s smeared all over this preview build, retro fans and arcade shooter fans alike are in for some serious, white-knuckle beastie saving.