Like a lot of other Chillingo titles, Gum Drop! has a great look. Pastel colors and jazzy music will usher you into the title menu, which is so basic that there aren’t even any instructions before you begin to play. This could be slightly disorienting if you’re used to being instructed in the games you play, but really this one is so self-explanatory you hardly need it. 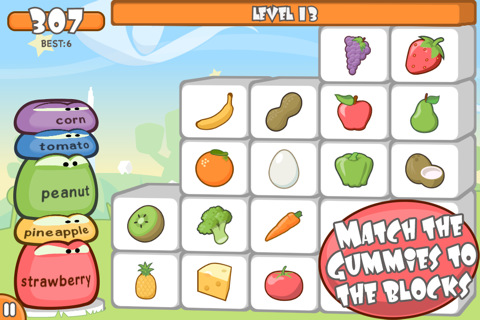 A stack of gumdrops sit on the far left corner of your screen, and the rest of it is dominated by a series of squares with pictures on them. A closer look at the gumdrops will show that each has a word on it. As you see the word represented by a picture on one of the squares, you touch it with a finger, and it vanishes. The gumdrop with the word on it deflates, and you take out as many as you can in order to drop another set of them and proceed to the next level of squares.

Gum Drop!’s challenge begins as you make progress. To begin, you only have nine squares to match, and the gum drops don’t expand too quickly. It’s when you hit level 7 and the blocks increase to sixteen on a grid that things get tougher. It’s also around this time that the items you have to identify on the blocks all start coming up one color, like yellow or blue. Let me tell you, this is where the game starts to become a total pain (albeit in a really challenging, kind of throw your phone at the wall kind of way). You’ll have to speed up to keep going. If you make a mistake and stab a block with an image that is not represented by one of the gumdrops on the left, guess what happens? One of them expands, doubling in size. Isn’t that super?

One thing you can use to your advantage is keeping an eye out for the items on the level above you. As you take blocks out, eventually, the upcoming level that’s above you will fall. You’ll be able to see one row of the blocks coming, and if you can match one to a word on a gumdrop, it takes out everything in the current level and moves you immediately to that one, which earns you a sweet little points bonus. It deflates the gum drops too, so you have a precious few moments of time to get your bearings on the new level. And believe me, you’re going to need them.

In addition tot he basic gameplay, you also have 25 achievements to dig into and Game Center functionality to brag about your scores. There’s a Facebook button too, so you can easily let people know you’re digging the game and encourage them to check it out too.

I like how simple Gum Drop! is. Typically iPhone games are pretty easy to learn to play, but this one is so effortless that it reminds me a little of the “jump in and play" mentality of games from the early retro era. I miss that sentiment, and while obviously many wonderful games are in the world that require a bit of instruction, on occasion it’s a breath of fresh air to play one that lets you jump in and play basically on instinct. It’s an elegant formula, and it works. Now if I could only get a little better at the levels where all the items are the same color…