There’s some pretty neat box-rolling games on the App Store, like Edge [$2.99 / Review] and Beyond Ynth [$1.99 / Review] which are both outstanding. But the latest box-rolling game to hit my iPod is Cubes vs. Spheres [99¢] by ShockPanda Games. It’s a 3D physics-based, almost “tower defense" game, where you fight off waves of advancing cubes, which roll towards your circular base.

The retina graphics are minimalistic and stylized. It’s a sterile white world with ledges, blocky edges and cool structures from which cubes pour down from. The first step is to determine which cubes to attack next (typically the closest, or biggest cluster), then select the most appropriate sphere for the job and finally, swipe the sphere in the appropriate direction, at the necessary speed and power, to smash the approaching cubes into flying fragments.

There’s six different super-spheres to unlock and buy (with game money). The blue “Splitter Sphere" can be tapped mid-flight, to split into three or five sphere’s, much like the birds in Angry Birds [99c], but presented in 3D. The “Boom Spheres" are, as the name suggests, explosive; “Homing Spheres" prefer not to miss, so they lock onto their target; while the popular “Decoy Spheres" attract the cubes, like bees to honey, so they pile up on top of each other — and then explode awesomely, blowing the unsuspecting cubes to bits. 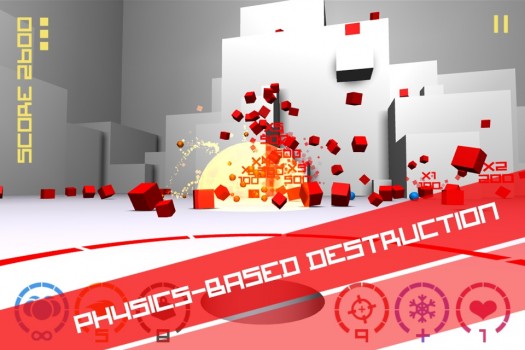 There’s also three different varieties of cube. Red cubes are the most common, with black cubes being stronger and the occasional ghost cube is intentionally harder to see. The cubes are all worth the same amount of points, with combos being key for larger scores.

The controls are pretty straightforward. There’s six buttons to choose and activate the type of sphere, then tap or swipe towards an enemy to roll or throw the sphere. The longer and faster the swipe, the more power is used for the throw.  Be warned – this is not a slow or easy game, as you typically end up swiping frantically to eliminate the cubes, especially near the end of each level.

The cubes sneakily approach from both the front and sides, so you need to look around to see what’s approaching. You can choose between tilt, swipe, or inverted swipe to scan the area. You can also tilt your device to look around the menu screens, but this only works while tilt-mode is enabled.

There’s 30 levels in total, split evenly between easy, medium and hard levels. Each level is rewarded by a three-star scoring system, based on points scored. A perfect score (“P") is awarded if your score achieves 3 stars and no cubes reach your base. To obtain perfects for all levels, you may need to replay some levels after unlocking the more powerful spheres. You can score combos by destroying cubes in quick succession, with the score multiplier incrementing with each cube eliminated, up to a maximum of 5x. Chain reactions also occur, as exploding cubes destroy other cubes, which helps boost your score.

Cubes vs. Spheres is a universal game, so you can install it on all of your iOS devices. There’s Game Center rankings for easy, medium, hard and total modes, plus 37 achievements. The developers advise that on the first day, approximately 90% of the Game Center users were not paid users, which is a shame because this unique sphere-tossing game has awesome cube-explosions, and that’s always worth paying for.