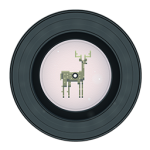 Superbrothers: Sword & Sworcery EP has been on our collective minds here at TouchArcade for over a year now. The first time I saw the game, I called it “the most amazing game I’ve seen at GDC". Blake was sitting nearby for the initial demonstration of the game, and later offered his own remarkably positive impressions. A year passed without much news on Sword & Sworcery aside from the Superbrothers team popping up for air every now and again to deliver some new screenshots, a brief video, or vaguely mention a potential release date. We caught up with them again at this year’s GDC where we were let in on the terrible secret of Sword & Sworcery’s development.

It turned out that what we were shown of Sword & Sworcery was all that was actually even completed at the time, and we had fallen in love with what amounted to little more than a prototype. This unconventional development approach actually allowed Superbrothers to follow the community feedback on what people expected the game to be, implementing quite a few of the suggestions along the way. In comparison, typically when we’re given a game preview the title is finished or close to it. At that point, there’s not much a developer can do with major community complaints aside from attempt to address them in updates. Superbrothers turned this process on its head, and it shows when you’re playing the game.

Before I continue with this preview, there’s something you should know about Sword & Sworcery. It’s as much of an experience as it is a game, and at times it’s more of an experience of pixel art and music than it is an actual game. This makes determining what is and isn’t technically a spoiler very difficult, as discovery is such an important element of this whole experimental project that Superbrothers is conducting.

If you’ve found yourself captivated by the few S&S details that have leaked out over the past year and have decided you’re going to download the game regardless, I’d really just stop reading here. It will have the most impact and by far will be the best experience going in to the game completely blind. Of course, I won’t blame you if you need to keep reading, but just beware that all bets are off after this screenshot: 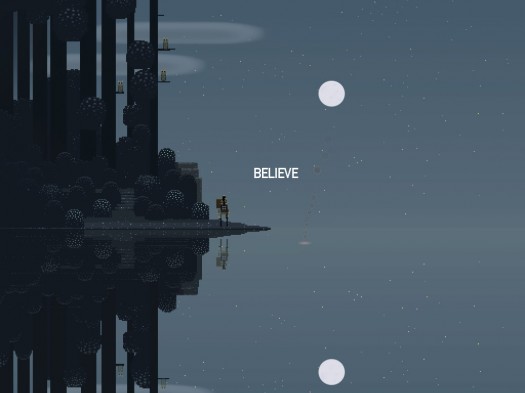 Sword & Sworcery opens with a mysterious cigar smoking man known only as “The Archetype". He explains that “S:S&S EP does not produce the transcendent experience, it is merely intended to free the nervous system of ordinary patterns." The Archetype serves as a narrator of sorts, and recaps what happened between sessions. Initially, he tells you that your first quest, which largely serves as part introduction and part tutorial. A few more taps on the screen and you’re playing as “The Scythian" in a lush forest.

The game is controlled like most other point and click (or, point and tap, I suppose) adventure games in that you can drag the camera around with one finger and use familiar pinching gestures to zoom in or out. Double tapping makes your character move to that location, or you can press and hold to move continuously in that direction. Once you’ve got a handle for the controls you’re quickly introduced to “Girl", “Logfella" and “Dogfella", the three supporting characters you’ll spend a considerable amount of time with on your quests. 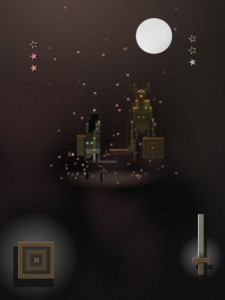 Throughout the game, you’ll need to use both sword and sworcery to progress. Drawing your sword to enter battle involves rotating the iPad 90 degrees, at which point a button appears for defending with your shield as well as attacking with your sword. As mentioned in previous S&S articles, combat works a lot like classic NES Punch-Out!! with emphasis on timing. Fights range from being very simple, requiring only blocking and counter-attacking to multi-phase boss battles.

Like any good adventure game, there’s a hefty amount of puzzles. Completing these requires “singing the song of sworcery," or, holding your finger on the Scythian until she is enveloped in a colorful halo of light. You will then be able to interact with the environment to complete puzzles that involve both music and logic.

Music plays an absolutely massive part in the game, as the soundtrack was created by Jim Guthrie exclusively for Sword & Sworcery. Similarly, the game itself was created around the music. It is incredibly cool how well the audio and visual effects tie together, at times feeling more like a movie than a video game. There’s even a point where the two collide, invoking spine-chilling levels of awesomeness. 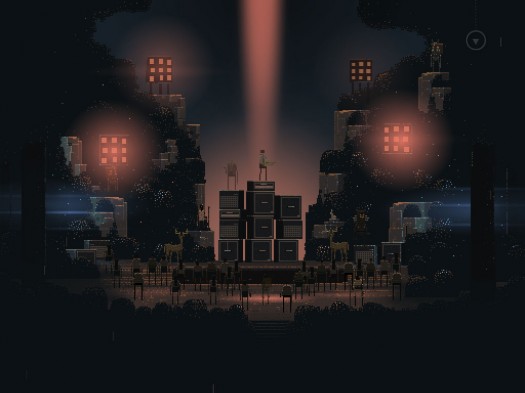 I’m reluctant to get much more specific in this preview, but the gloves will be off for our full review when the game launches this Thursday. What I will say is that having played all the way through Sword & Sworcery already, I think it’s incredible how Superbrothers have managed to combine both action-oriented gameplay through sword fighting and incredibly existential puzzles through the sworcery components. I enjoyed the game with a partner, who is great at decoding musical puzzles, while I handled the fighting and movement. It was an incredible experience, even more so as our two play styles managed to complement each other for completing the two distinctly different modes of gameplay.

If this preview has left you wanting even more and you can’t wait until Thursday, Superbrothers sent us the following brief gameplay video captured from the opening portions of the game. Much like reading this preview, if you really want the full experience of discovering this game I’d avoid watching it.

Stay tuned for the iPad release of Superbrothers: Sword & Sworcery EP which is scheduled this Thursday. Like all Thursday game releases, it will actually hit the US App Store at 11:00 PM EST on Wednesday, or earlier than that if you’re using one of the various international App Stores. We’ll have our full review then, but I still won’t recommend that you read it until after completing the game. If you’ve got an iPhone, Superbrothers is saying the iPhone-specific version of the game will arrive sometime next month.