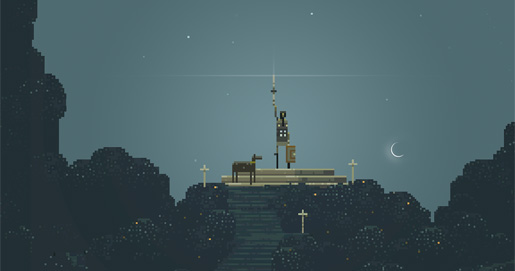 While out in San Francisco covering GDC 2010 I saw many games for many platforms, the iPhone among them.  And I’m happy to report that I didn’t encounter a single “bad" iPhone game at any point during the week. The trip reinforced the fact that iPhone gaming is just huge — and it’s growing. And iPad gaming, based on what I saw from numerous developers, is going to be amazing.

But of all the solid titles I spent time with, the one I’m most excited about is Sword & Sworcery EP which we took a brief look at earlier in the week. I’ve given the game a great deal of thought since we saw it at GDC and wanted to go into a bit further detail and share some additional thoughts on it for our readers.

Sword & Sworcery EP recently won an achievement in art award in the IGF Mobile 2010 competition. It’s a stylized, artistic adventure developed by Superbrothers + Capybara Games + Jim Guthrie that dazzles with its rich and mysterious atmosphere established by a unique pixel art graphical presentation, an ethereal soundtrack that sets the mood for every screen, and sparse instructional cues on the outset that make you, the player, feel like a truly small entity in a large, alien world.

The designers call it “i/o cinema."

Right now I can’t fully setup the scene for you, as the whole of the scene is still in the minds of the game’s creators, not yet entirely implemented on the iPhone. What we were shown at GDC 2010 was meant as a teaser, a taste of the world that will be fully realized in the estimated three months between now and the game’s App Store release. But what we did see was, in a word, moving.

In Sword & Sworcery EP, you control a female character exploring a mysterious world. Armed with sword and shield, you begin to explore your edenesque surroundings, tapping and holding in the intended direction of travel. You walk along paths, climb up and down stairs carved into the landscape, wander into the depths of the backdrop — even walk upon water. Brush a finger across a tree or bush and it responds to your touch.

But why are you here? What is your mission?

As you wander about this strange world you hear the chirping of insects, see various fauna dwelling in the bracken. Before long you encounter a strange being of obvious intelligence peering out at you from the wilderness. It retreats in response to your chase and gives little indication as to whether it is friend or foe. Eventually you follow it into its lair and are challenged to a fight. As you rotate your iPhone to enter the game’s fight mode, you begin exchanging blows with this curious character. With some savvy you bring it to its knees, rendering it helpless, waiting for your final blow.

But…do you end this creatures life? Will you deal out death upon this helpless being whose world you have infiltrated? Or will you show mercy? 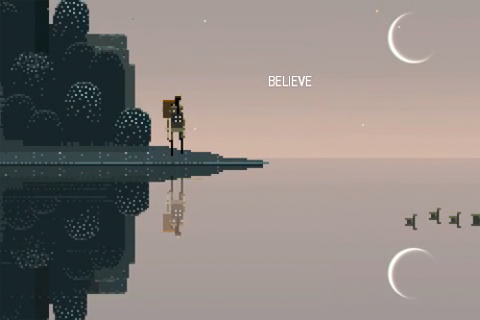 I will tell you that, in playing the game for less than five minutes, my feeling was that this strange creature was not an enemy. When it came time to deliver the killing blow, I very much felt that it would be wrong to do so. In the interest of fully demonstrating the game, however, I went ahead and ened its life. I regretted having to do so and found that, for hours after I set the game down, I felt guilty for having slaughtered what may have been a peaceful and benevolent creature. The experience absolutely saddened me.

This, from about four minutes of gameplay in a title that presently exists only as a teaser that presents but a portion of the creators’ total vision. I consider my reaction to this experience to be highly telling. I honestly can’t recall ever playing a game so emotive, so affecting. 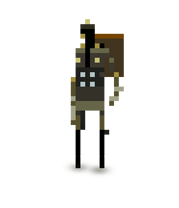 Now, I don’t mean to sound like an elitest gamer, or one that looks down my nose at other players, but if all you are interested in is button smashing and explosions, then Sword & Sworcery EP is probably not for you. (And, mind, I do, myself, enjoy a great many button smashers.) But if you are open to a game that can take you on an emotional journey, cause you to examine your own system of morality, and deliver an experience quite unlike anything you have known before, then Sword & Sworcery EP is probably worth your while. (And this is a game, not merely an artistic curiosity — discussion with the designers about what’s to come assured me of that.)

The comment thread trailing from our initial look at the title is lengthy and rather polarized. People seem to either love what we’ve shown of the game, or hate it. The love points mostly mirror my own, presented here, while the hate points bemoan things like “unsightly", pixellated graphics, “lack of visuals", obviously “boring gameplay", “rehashed crap", and a misspelled title.

The pixel-art graphics serve a two-fold purpose, in my opinion. Use of such a graphical presentation necessarily adds a certain degree of vagueness to what the player is able to know about the onscreen avatar. This vagueness forces the player to become closer to the main character because the image of just what the character looks like exactly involves a bit of imagination on the part of the player. Additionally, the graphics style is a clear nod to Eric Chahi’s 1991 classic Another World (a.k.a. Out of this World) which delivers a somewhat similar play atmosphere and was a major inspiration for this title, as designer Craig Adams of Superbrothers revealed to me. And so, if there’s any “rehashing" going into Sword & Sworcery EP‘s equation, it’s of Another World, which few would call “crap." And that’s not to mention the fact that, as far as pixel art goes, in Sword & Sworcery EP it’s original and very well done.

Wanting to share a bit more of the title than is revealed in the two videos released this week by the developers, we recorded some gameplay on the expo floor at the Superbrothers + Capy + Jim Guthrie booth in the IGF Mobile area. Thanks to Craig for the fingers.

All of us here at TouchArcade find Sword & Sworcery EP to be an amazing piece of work and are extremely anxious to get our hands on the final version in order to discover more about the nature of this mysterious game world. And, if you think what you see here holds little interest for you, well — you may be right — but if ever there was a game that might just take you by surprise, I’m guessing this is it. It’s a situation that really makes me hope that the developers offer a free, lite version so the haters can at least give it a shot before passing it by.

At any rate, we’ll take a very close look at Sword & Sorcerer EP when it hits the App Store mid-summer and let you know what we find.