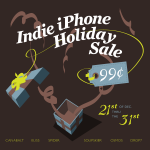 Last week we posted about the Indie iPhone Holiday Sale, a joint effort from six developers, each with fantastic indie titles, to raise money for Penny Arcade’s Child’s Play charity. It really doesn’t get more win/win than this. For $6, you get six great games, and some of the proceeds go to helping improve the quality of life of kids in hospitals across America.

The following games are still on sale until the 2nd of January:

To celebrate raising so much cash for kids in need, Semi Secret Software made a substantial announcement: Canabalt is now totally open source via the MIT license. This is the full latest version of the game that hasn’t even been approved yet on the App Store which features some pretty sick OpenGL optimizations I’ve been told, allowing the game to run at 60fps on recent devices.

If you’re a pioneering iOS developer, check out the source here. The license they’re using is open enough that you can basically use the game engine for anything you want, provided you’re not redistributing the game code, graphics, or sound. This really makes me wonder if we’ll see a Canabalt spinoff that features all the unanswered suggestions from our forums.

Either way, this is great news for the developers participating in the sale, developers who are interested in looking under the hood of Canabalt, and most importantly: The kids benefitting from these donations.