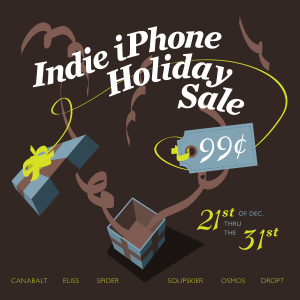 ‘Tis the season of giving, and in recognition of this six independent iOS developers have banded together to not only give you a great deal on their games, but also give some cheer to less fortunate gamers around the world. From December 21st to December 31st, 6 games will be available individually on the App Store for just 99¢ each, one of which has notoriously never been on sale before: Canabalt. It’s all for a good cause, though, as one-third of all total sales earned during this promotion period will be donated to Child’s Play Charity, an organization that collects video games, toys, books, money, and more for children who are spending time ill in hospitals throughout North America and the world.

Here is a list of App Store links to the 6 games that are 99¢ as part of the Indie sale along with links to each developer’s website and our review for each game:

I could easily talk about each of these games at great length, but the bottom line is that they are all superb games in their own right and are all worth owning if you don’t already. Even if you do own some of them, it wouldn’t be a bad idea to gift them to some of your iOS owning family and friends while they’re on sale, and you can feel good knowing you’ve contributed to helping kids in need during the Holiday season. You can visit the Indiesale.com website for some more information about the promotion, as well as a link to some bonus wallpapers and ringtones from these developers.