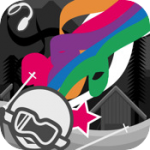 It’s not very often that a game comes along on the App Store that is too different to really liken it to anything. I suppose since the game involves going moving to the right it could be compared to Canabalt [$2.99] or Line Rider iRide [$1.99] since you’re technically drawing the line that your character skis on, but neither seem like apt comparisons. In Solipskier [$2.99], you draw the mountain that your skier flies down by placing your finger on the screen. When you pick your finger up, you stop drawing but your skier keeps going– So, by tapping and moving your finger around you can create slopes of all kinds, along with ramps and huge jumps. 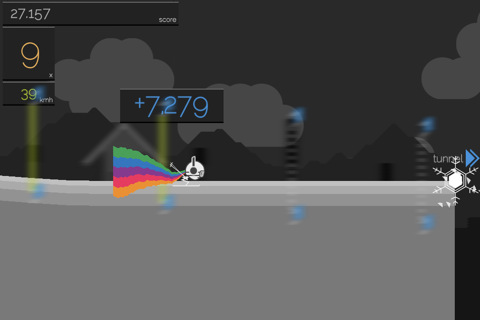 The way this all works on the iPhone goes together so well with the touchscreen that I was more than a little surprised in researching this game for this review that it started its life as a completely free to play flash game that is played by clicking the mouse instead of dragging your finger around. The presentation is top notch too, with music that ranges from this really somber sounding piano piece in the menus to a fast paced heavy metal rock ballad while you’re skiing. 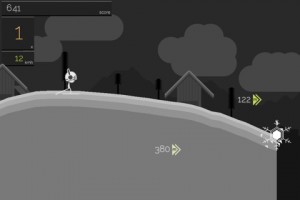 Also, as you paint the slopes with your finger houses and trees spring up from, and despite being largely black and white and 2D, the scenery has quite a bit of depth to it, with trees and houses scrolling on front of the scoreboards. Yet another cool little flourish in the game is that the music you’re listening to is actually emanating from your character’s headphones. If you go fast enough for them to fall off, all you hear is the sound of the wind. Upon successfully landing a jump, you’re judged by off-screen judges who hold signs up scoring it, and the name of the game is to just score as high as possible.

Included in the game is OpenFeint online leaderboards for tracking scores, although achievements are curiously absent. Scoring high seems to be highly dependent on keeping your combo going to keep the rainbow following your skier up, which involves constantly skiing through the gates and tunnels are they appear on screen. One mistake I initially made when playing the game was drawing my jumps far too steep, and seem to be having better luck with long slow inclines and then short ramps at no more than a 45 degree angle. Forum member Ataloss offers additional tips in the Solipskier thread.

If nothing else, you should really try the free flash version, but just be aware that the game seems to work even better using the touchscreen of iOS devices. Solipskier is universal, and even comes with high resolution graphics for the Retina Display of the iPhone 4 (which look excellent, by the way). The game plays nice with the fast app switching in iOS 4 and reloads instantly, but it would be really nice if the game resumed in a paused state to give you an opportunity to reorient yourself before playing instead of having your little dude just go right back to skiing almost always resulting in death.

Overall, it’s really hard to ask for more in a Flash to iPhone port, and Solipskier is really worth grabbing if you’re even the least bit captivated by the Flash game.