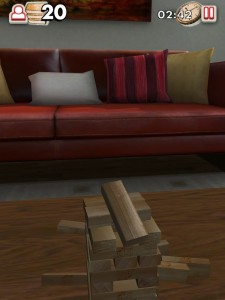 Tabletop games are tactile beasts, but few rely on feedback as much as Jenga. You start the game with a block spire, perfect and tall. And then you chip at its fortitude as blocks are removed. The recipe for success, I think, is one part attention and two parts confidence. But both require touch. You need to feel that loose block and gauge it versus others before you pull it.

This is why Jenga for iOS [$2.99 / HD] struck me as strange. Sure, you can approximate the actual game with a touch screen, but can the sheer physicality translate to digital? Because without it… well, you won’t really have Jenga.

The answer lies somewhere between “yes" or “no." Video Jenga certainly looks like the real thing and responds like the real thing. In fact, the game even tries to capture that hide-and-seek aspect of physical Jenga. When you touch a virtual block that is integral to a tower’s stability, a red highlight appears, steering you clear. The loose blocks, however, are tinted in shades of white and pink — safe colors. 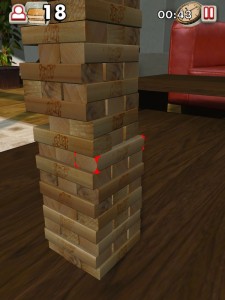 And you pull like you would in the real thing. Once you identify a block you want to get rid of, you need to be slow and exact. The video variant approximates this via a bow-and-arrow-like interface in which the block is the arrow and you are the string. Pull it back softly and to the center of an invisible bow and then the block is removed.

Pull it too hard or grab a piece that matters and the tower crumbles.

But What Jenga lacks is something that simply can’t be translated to games: weight and substance. All the visual clues in the world can’t replace what a Jenga feels like to play, and as a result, there’s a brutal disconnect.

That isn’t to say that this is a wash. Jenga for iOS works and it provides a true enough interpretation of the tabletop game. What doesn’t translate is reality and that’s never, ever been recreated in a video game in any satisfactory regard. Even life simulations fail here.

Give Jenga a shot if you’re hankering for the game without the mess, or actually, if you ever wanted to try a zany arcade version of the game. The game’s “Arcade Mode" assigns point values and weird bonuses to colored blocks, which is a cool twist on an otherwise bland experience. There’s also a pass and play mode, too, if that kind of thing is your bag.