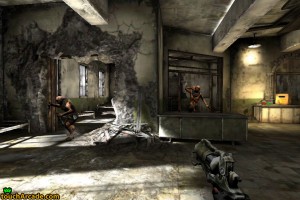 Late last month we covered John Carmack’s announcement on the Bethesda Blog regarding his plans with future iPhone development. It turned out that he wasn’t planning on making a full-blown RAGE port like we originally suspected when he demonstrated RAGE on the iPhone 4 at Quakecon, but instead is bringing a more iPhone-friendly game that takes place in the RAGE universe.

This game world is based on a post-apocalyptic future, following the Apophis asteroid smashing into Earth. (A plausible future, given there actually is an Apophis asteroid which at one time scientists believed had a 1 in 42 chance of hitting our planet.) In the full PC and console versions due out 9/13/11, you play as a member of the Eden Project, a government program that placed important members of society in underground “arks". 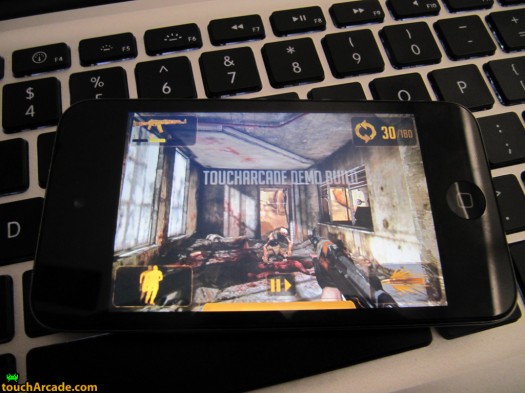 The goal of all this, much like the vaults in the Fallout series, is to be able to restore society after the nuclear (or in this case, asteroid) apocalypse. Unsurprisingly, the ark system doesn’t work as well as was hoped. You are the sole survivor of your ark, and with all the other members of your group dead, you awaken to a very different future in a world that has long since forgotten about the Eden Project and the existence of the arks.

It isn’t really clear whether you’re playing as this same protagonist in Mutant Bash TV, but the basis of the iPhone game is that you are a contestant on a weekly game show where people are pitted against an onslaught of mutants to win fabulous prizes. It works well, and I’m sure I will appreciate it more once RAGE is actually released and I get more of the tie-ins with other elements of the RAGE world. 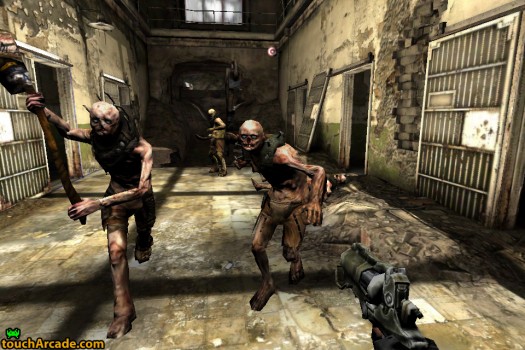 Mutant Bash TV plays surprisingly similar to DOOM Resurrection [$6.99]. The entire game takes place on rails, and even the controls are laid out similarly. Tilting controls the camera and your aim, and you have buttons to dodge, fire, switch weapons, and reload. The main difference is just how much faster everything is in Mutant Bash TV. Mutants pop up everywhere, and while you’re dealing with them there are bags of cash to grab and bullseyes to shoot. Your overall performance is graded at the end of the level, at which point you can either move on to a new level or replay the last one for an even higher score. Four difficulty settings are included, ranging from easy (where it’s seemingly impossible to die) to nightmare (which is incredibly difficult).

In the preview we were given, only the first level was playable, which takes place in the mutant tenements. These tenements look a lot like your typical broken down corridor-heavy graffiti-covered first person shooter level, but you hardly have time to look around at the scenery because there is no downtime. You’re always either shooting or quickly moving to the next area. 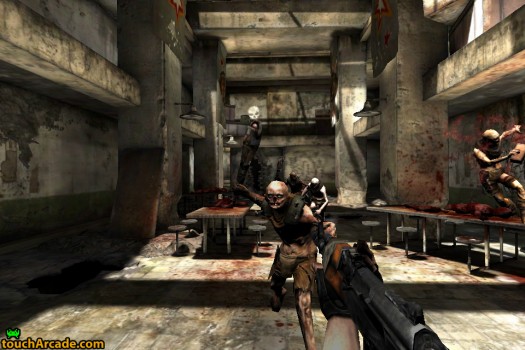 The graphics of Mutant Bash TV are amazing, and really make me look forward to the future of iOS gaming. The demo we were given was on a 4th generation iPod touch, which consistently ran at a high framerate throughout all parts of the game we had access to regardless of how much was going on at once. Mutant Bash TV looks so good in motion that the screenshots barely do it justice, especially when you add the pixel density of the Retina Display into the mix. While you might notice some jagged edges or low resolution textures if you were to carefully analyze the screenshots on your computer, none of this is apparent at all when you’re playing it.

I’m sure there will be people out there who are disappointed to find out that Mutant Bash TV is a first person shooter on rails, especially with the backlash we saw surrounding our DOOM Resurrection review. However, after playing the demo level over and over, I really thought that the automatic movement was basically exactly what I’d be doing if I was actually controlling my character. Instead I didn’t need to have a third of the screen obscured working two virtual thumb sticks. In any case, due to the level design it doesn’t seem like there’s anywhere else you could go if you controlled your movement in Mutant Bash TV. Since this was just a brief demo, it’s hard to get a real idea of what the rest of the game will entail. 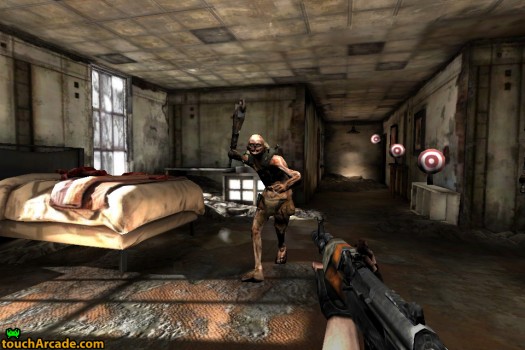 It’s incredibly exciting to see industry giants Id and Epic going head to head in releasing their next-generation graphics engines on the iPhone. Id’s Mutant Bash TV should beat Epic’s Infinity Blade to market, as currently Id is shooting for the end of November for the release of Mutant Bash TV. Meanwhile, Infinity Blade is still set for a vague holiday release. Pricing hasn’t yet been released for Infinity Blade, but Mutant Bash TV is launching at 99¢ for non-Retina Display iPod touches and iPhones and $1.99 for Retina Display-equipped devices and the iPad. After being amazed by Epic Citadel [Free], looking forward to Infinity Blade, and now getting my hands on Mutant Bash TV, I can say with the utmost confidence that this is an incredible time to be an iOS gamer.