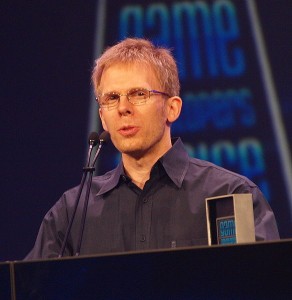 Id Software’s Rage is high up on my list of games I can’t wait to play. It’s going to be released on the PC and home consoles on September 3rd, 2011, and spinoff game for iOS devices is also in the works that is coming this November. The Bethesda Blog posted a developer diary of sorts by John Carmack today which is filled with some great technical details and newly revealed information on their upcoming Rage-based iOS game, Mutant Bash TV.

Starting things out, John admits that mobile development at Id hasn’t been on the top of the priority list, and it wasn’t until the end of July that he even started writing the engine that would power the iPhone game. (We saw the results at QuakeCon.) In the post, Carmack also reveals that while with this engine it’s technically possible to compile the full-blown PC/console version of Rage for the iPhone, he describes it as a “hopelessly bad idea," citing inappropriate performance tradeoffs and control differences.

He admits what they do have is fun, and unlike anything else available for the iOS. After seeing the success of Myst, which is a 700MB download, that became their target file size for the “standard definition" version of the game. The “high definition" version for the iPad and iPhone 4 will be twice that size. Carmack then goes on to explain that the full version of Rage weighs in at an incredible 20GB. Even more surprising, this game is going to launch at 99¢ for the standard version, and $1.99 for the HD. Carmack thinks “people will be very happy with the value." 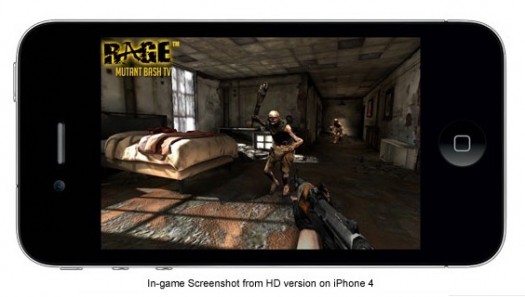 But what is this game going to be all about? John explains in detail:

The little slice of RAGE that we decided to build the iPhone product around is “Mutant Bash TV”, a post apocalyptic combat game show in the RAGE wasteland. This is the perfect setup for a quintessential first person shooter game play experience — you pick your targets, aim your shots, time your reloads, dodge the bad guys, and try and make it through to the end of the level with a better score than last time. Beyond basic survival, there are pickups, head shots, and hit streak multipliers to add more options to the gameplay, and there is a broad range of skill levels available from keep-hitting-fire-and-you-should-make-it to almost-impossible.

A large goal of the project has been to make sure that the levels can be replayed many times. The key is making the gamplay itself the rewarding aspect, rather than story progression, character development, or any kind of surprises. Many of the elements that made Doom Resurrection good the first time you played it hurt the replayability, for instance. RAGE iOS is all action, all the time. I have played the game dozens of times, and testing it is still fun instead of a chore.

Carmack has built his life around making games that are not only technically impressive and beautiful, but also tons of fun to play. If gameplay is in fact the rewarding part of Mutant Bash TV, I can’t wait to give it a try. This all is making the end of November seem even more far away.