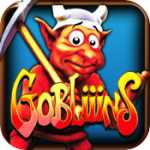 If you were a PC gamer back in the early 90s, you may remember a point-and-click adventure game by the name of Gobliiins [99¢]. In the game you took control of three different goblin characters who each had their own unique abilities that would need to be utilized to solve a series of (sometimes nonsensical) puzzles. A charming art style and humorous story complimented the clever use of the different characters in Gobliiins, which went on to spawn 3 sequels in the two decades since its original release.

Fans of Gobliiins will be happy to know that a port of the game, developed by DotEmu and published by Bulkypix, is now available in the App Store. The game contains all 22 of the original levels and remains largely unchanged other than having an added hint system and being slightly reworked for touch screen controls.

While the impressions in our forums are largely positive, they are predominantly from players of the original Gobliiins. It’s important to note that this is a game from 1991, and lacks some of the refinement that came with later adventure games of the era. If you have fond memories of Gobliiins and are looking to scratch that nostalgia itch, then this version should be a no-brainer. If you never played the original but are looking for a new adventure game to play, the dated feel of Gobliiins may be a bit hard to overcome.

As a small word of caution, Gobliiins seems to be having some loading/freezing problems on certain devices. DotEmu has stated in the forum thread that these issues are being addressed and should be resolved in an update.