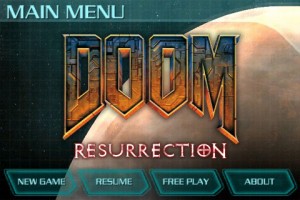 The Doom name carries with it an enormous 16 year legacy that results in some massive expectations for any adaptation. This iPhone version of Doom has been in development for over 6 months and utilizes many of the assets originally created for Doom 3. As a result, the game will look quite familiar to those who have played Doom 3.

The best compliment I can offer to Doom Resurrection is that despite some controversial changes, it “feels" like Doom and is a lot of fun. And as a reviewer, there are games I have to play to the end and games I want to play to the end, and Doom Resurrection easily fell in the latter category. The game makes good use of the Doom 3 graphics and audio to provide an immersive game that sucks you in for the duration. 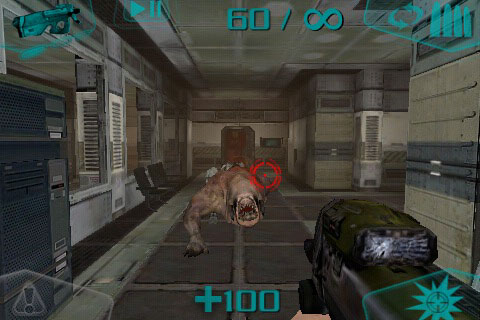 Unlike Doom, Doom 2, and Doom 3, Doom Resurrection is not quite a traditional first person shooter. The character movement in the game is scripted along a pre-determined path. This means that you move along from scene to scene automatically as you combat demons and zombies with your available arsenal of weapons. The shooting component of the game, however, uses an accelerometer controlled reticule that is used to target the enemies. Incoming projectiles can be dodged with well-timed presses of the “dodge/cover" button, while cover can be temporarily sought from machine gun wielding enemies using the same button. Escalation Studio’s Tom Mustaine had explained to us at WWDC that they had originally experimented with a tap-to-shoot mechanic but the game simply wasn’t any fun. The accelerometer controlled aiming mechanism, however, really does work well and manages to offer an immersive Doom-like experience on your iPhone.

Doom fanatics will find familiarity with the variety of weapons strewn throughout the game. Some of these include a double barreled shotgun, plasma rifle, chainsaw and yes, the BFG. Weapon selection is more than just for visuals, as different weapons are more or less effective on different enemies. Health and ammo pickups are available throughout levels and are picked up by tapping on items directly.

The game includes 4 levels of difficulty from Recruit to Nightmare. Your performance in each of the eight levels is graded on an A-F scale based on your headshots, time, and item pickups and secrets found. Long term replayability involves the ability to replay individual levels at different difficulties for higher scores. While the gameplay remains similar throughout, the addition of new weapons and enemies do tend to keep things interesting.

The 8 levels went by relatively quickly with my first time through taking somewhere between 2-3 hours on the 2nd level of difficulty (Marine). The story line of the game, however, is a bit weak though it introduces the first dialog from the Doom marine himself. These cut scenes, pre-scripted sequences and dialog screens are ok the first time through, but when playing through again, you wish you could cut past them quicker than you can. While lengthy dialog can be skipped, you still have to go through the motions of some of the cut scenes. My only real gameplay gripe was that the cover mechanic becomes repetitive in some of the later levels.

Based our interview with both Escalation Studios’ Tom Mustaine and id Software’s John Carmack, it seems they are really proud of this release, and I can certainly see why especially given the realistic constraints of the platform. I believe Doom Resurrection will be a huge hit amongst both casual and hardcore iPhone gamers. There will, of course, be a vocal few that simply won’t be able to get past the “on rails" aspect of the game, and to those, I suggest trying the game before passing judgement.