John Kooistra’s games have been long time favorites around here on TouchArcade, with both Blue Defense and Blue Attack the topic of discussion during episode #5 of our podcast where we had Kooistra on to chat about his then upcoming but since released RTS game Red Conquest as well as the formation of his new development studio, Cat in a Box Games. We just received word that while a sequel to Blue Defense is still in the works along with episode 3 of Red Conquest, Cat in a Box plans on launching their next game, Fastar! on July 30th. 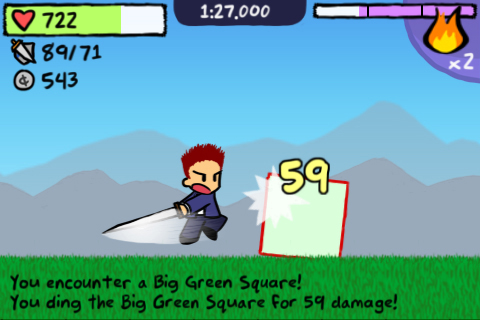 Fastar!, or Fight Angry Squares: The Action RPG, is set around the seemingly ridiculous premise of being an action RPG for when you don’t have time for an action RPG. Set in an intentionally vague fantasy world, players fight nothing but squares which oddly enough seem to explode coins upon dying. 24 game modes are included, with many focusing on playing through the game as quickly as possible.

There’s a magic system, an in-game shop to upgrade your character, and even online leader boards to post your various speed runs to. Fastar! sounds fairly clever, blending both the quick pick up and play game styles that have become so popular on the App Store with gameplay mechanics action RPG. If all goes as planned, Fastar! should be available on the 30th for 99¢.