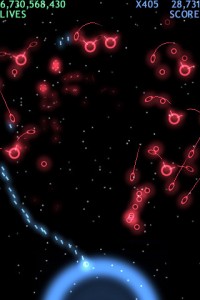 If you like shooters, you should just get this game.

It’s funny how we frequently get more excited about the simple games than the high profile efforts. In the end, however, it’s all about the gameplay.

John Kooistra’s Defend! [App Store] is a $0.99 iPhone shooter with relatively simple graphics and no sound. The controls of the game, however, are remarkably well suited to the platform and already feels like a “classic" iPhone game.

You are defender of a planet with a population of 6.7 billion people. You job is to fight off an oncoming barrage of enemies. Each enemy that gets past you takes out millions of lives.

Controls are dead simple. You continuously fire straight up, and tilting the iPhone left and right adjusts your aim. The game also cleverly shifts orientation between levels, requiring you to turn your iPhone around or into landscape position. The video shows it best:

Progressive levels are increasingly challenging and provides a good amount of gameplay. Normally, we frown upon games without sound, but for $0.99 and an otherwise fun game, we can overlook it.