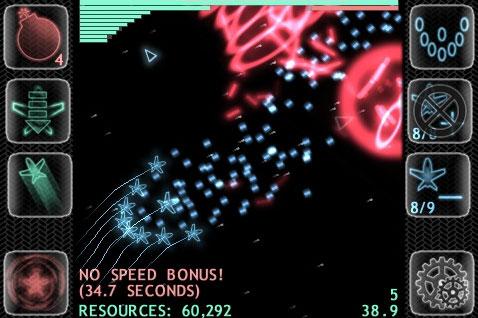 In November, we profiled a $0.99 game called Blue Defense! [App Store] which we praised as a “simple but effective shooter." Developer John Kooistra managed to blend together a simple concept into a really solid shooter and won us over along with many of our readers.

His followup title is appropriately enough called Blue Attack! [App Store, $1.99] in which you take the offense and track down the Red invaders from the original game. Kooistra has added a significant degree of complexity to the game by offering upgradable ships with improved weapons and capabilities. Yet he still manages to offer a surprisingly fun and deep game.

At its core, this game is a shooter, pure and simple. You pilot a ship which is based on a carrier which you must defend. Your ship can be accompanied by a number of wingmen which offer additional firepower to destroy the enemy ships. Each enemy formation contains a “core" which must be destroyed and your job is simply to battle each wave and destroy all the enemies before they destroy you.

Both touch and accelerometer controls are offered and are effectively implemented. Unlike traditional scrolling shooters, however, you have full directional control and must master your ship’s navigation in order to deliver a focused stream of firepower against your enemies. There are two modes of play: campaign and unlimited which both offer plenty of gameplay and time to hone your skills.

The single best part of the game is the ship upgrade system. After each wave of attackers, you earn “resources" which can be spent on upgrading your ship. More wingmen, for example, can be purchased to increase your firepower. Other upgrades range from bombs, extra lives, faster speed, and improved handling. Upgrades appear to be well balanced and you’ll enjoy testing out your new abilities.

Combined with the different play modes, these features offer a fun game with plenty of replayability. As a result, for only $1.99 Blue Attack! comes highly recommended.