The iPhone has attracted a notable number of Amiga game ports since the App Store went live. Worms, Pinball Dreams / Fantasies, Krypton Egg, Beneath a Steel Sky — the list goes on. For those unaware, the Amiga was an extremely innovative platform, released in 1985 by Commodore, that saw rather limited success outside of Europe. It featured a lean yet powerful operating system and a great deal of custom hardware that made it the choice gaming platform of the day (for those that were aware of its existence). Despite Commodore’s demise in 1994, a few stragglers still carry the Amiga torch.

In an App Store first, the iPhone is about to receive a port of a highly praised Amiga game…that never was. 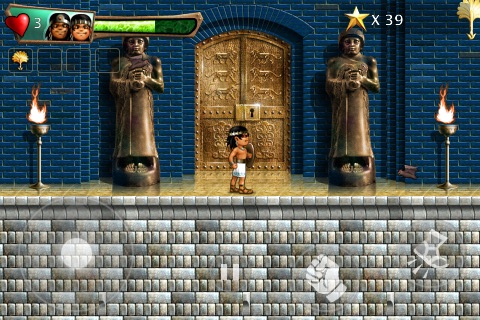 In 1993, Iraqi developer Rabah Shihab, part of the Mesopotamia Team, began work on the Amiga title Babylonian Twins (with basically no budget), inspired by what he saw of other games’ depiction of Iraq. As he explained in an interview with Amiga Games That Weren’t,

…My real dedication for this theme came during the early nineties after I saw a computer game in which you control a warplane with the goal of bombing Iraq. Putting the bombing aside (I was in Baghdad during the first gulf war and I saw the human suffering that resulted from the real bombing ), I didn’t like the way they depicted Iraq in the game, as a primitive and uncivilized place. I wanted to build a game that counter that image, a game that shows the vibrant history of Mesopotamia. In Babylonian Twins, the game takes you to different historical places, from Babylon to Assyria. We relied on authentic history books to design many of the graphics in the game.

Shihab was impressed by the smooth scrolling of Team 17’s Amiga title Superfrog and set out to deliver similar visual finesse in his title. Another inspiration was Konami’s MSX release Maze of Galious. The team released a very well-liked demo version of the game, but no full Amiga release ever came. And although he, later, targeted the Xbox Live Arcade, it’s the iPhone that will at long last receive the final release. And, befitting the game’s history, the full Amiga release is also imminent.

The forthcoming game is a puzzle platformer with an authentic historic feel and unique two-character gameplay. It features the puzzle elements of Maze of Galious with the multi-character control of Lost Vikings, along with the glass-smooth animation of Superfrog. The author indicates that the iPhone version features an original soundtrack, excellent graphics, and over a dozen large levels.

See the developer’s trailer video for a look at the updated version.

Videos of the original Amiga demo version can be seen here, here, and here. Amiga screenshots are also available.

UPDATE: In putting together this post, we sought further information from the developer, but he got back to us a bit after the post went live. Shihab wants to make sure readers are aware that the iPhone version of Babylonian Twins is an entirely new game that borrows no graphics or audio from the Amiga version. He assures us that all aspects of the game have been enhanced specifically for the iPhone by a dedicated team (and this time around on a healthy budget) over the course of the game’s six-month development cycle.

We’re quite anxious to get our hands on the final product and will bring further news of the iPhone release of Babylonian Twins as we get it. Stay tuned.