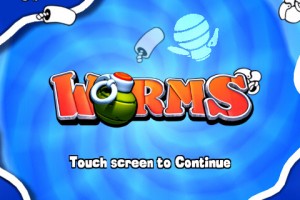 Forum superstar and night owl WunDaii discovered Worms [App Store] becoming available for download just before 5:00 AM this morning, and since then our forum has been host to a lively debate as members purchase the game.

Worms is a turn based artillery-style combat game developed by Team17 Software based on a series of over a dozen previous Worms titles starting with the original in 1995. You control a small team of several worms and during the game, players take turns attacking with a large variety of weapons to either kill or drown enemy worms.

At the start of each turn, you can move your worm (or use ninja ropes, jet packs, and other items to reach areas that would be inaccessible otherwise), fire with whatever weapon you choose, and briefly retreat. Littering the battlefield are mines and exploding barrels that can either be avoided or used to your advantage as you blast enemy worms in to them. 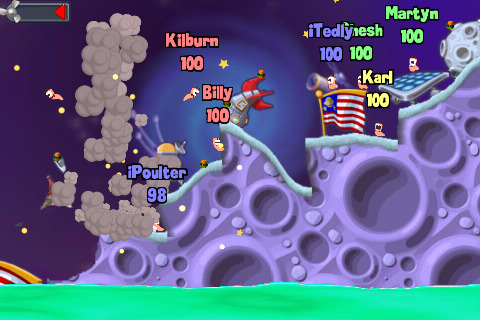 Reactions on our forum have varied widely between those who are really enjoying the game, and those who are having issues with the performance, controls, or both. I feel Worms could really benefit by having the option to enable an on-screen D-pad as the default controls feel clumsy and make complicated movements like jumping over mines or precise backflips far more difficult than they should be.

Another problem with Worms is the limited available zoom levels. I felt like I couldn’t zoom in far enough to see what I wanted to see (such as positioning a worm at the very edge of a cliff to drop a grenade) and you can’t zoom out enough to accurately aim long-range shots. Swiping with two fingers on the screen pans the camera, but this also felt strange as most battlefields require 4-5 full swipes to move the camera from one side to the other with it zoomed out all the way. 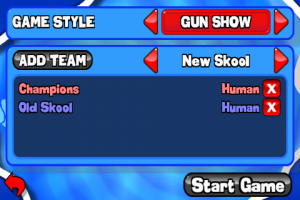 The only multiplayer currently available in Worms is single-device local mutliplayer, a strange omission given how popular online multiplayer has been in previous Worms games. Also, in the limited local multiplayer mode, there’s no way to customize which weapons are enabled and how many are available aside from a few different game modes such as only enabling bazookas and grenades, or only allowing melee combat.

As previously stated, reports of in-game performance seems to vary widely and I’ve confirmed there is a massive framerate difference between my 3G and 3GS. Worms is host to various visual effects such as colorful animated backgrounds and particle effects that blow in the wind. Given the lackluster performance in previous-generation devices, having the option to turn off some visual fluff in exchange for an increased framerate would be a welcome addition.

Video played on an iPhone 3GS:

Of course, if you can get past (or aren’t affected by) the performance issues, lackluster controls and limited multiplayer, Worms certainly does preserve the gameplay of previous iterations and is dripping with the cartoonish charm that Worms games are famous for. That being said, there are many more artillery-style turn-based battle games on the App Store that offer weapon customization like iShoot [App Store] or complete internet multiplayer like Star Hogs [App Store].

If you’re already a big fan of Worms, you may not be able to resist downloading this iPhone version while you await multi-player updates and performance tweaks, but for everyone else, I’d recommend checking out some of the alternatives for now.