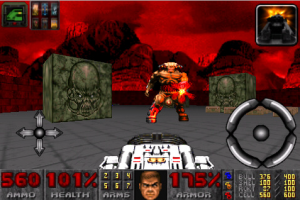 id Software’s Doom Classic finally appeared in the App Store after a lengthy wait. John Carmack, himself, seems to have done most of the work in reviving this classic title for the iPhone. Doom Classic brings four episodes across 36 levels and revamps the control system to a touch-screen friendly system.

Those familiar with the Wolfenstein 3D Classic controls will likely feel at home with the adapted Doom controls but there have been several upgrades to the system. Doom Classic offers 3 different control systems with the option of adding accelerometer strafing. These include:

Each of the controls can be customized further by dragging and dropping them on the screen to the desired location. Notably, the sticks are now “floating" sticks by default that allow more freedom in where you place your fingers down.

The #1 control option offers the benefit of simplicity, with a single stick for movement, though at the sacrifice of pure left/right strafing which is more easily accomplished with the #2 control method. Controls seemed a bit sensitive during my early play with no options to adjust the degree of sensitivity.

Meanwhile, there are a number of control customization options, including the ability to fix the location of the controls (similar to Wolf 3D) or turn the control graphics off completely and just use the left/right sides of the screen. This latter option allows the game to emulate the other first person shooter controls that we’ve seen in Eliminate and Modern Combat. So far, this has been my favorite combination: #2 with Draw Controls: Off and Auto Use: On (so you don’t have to tap on doors to open them), and sensitivity here seems better, but not perfect.

When we spoke to Carmack back in June, he had big plans for the Doom franchise on the iPhone, including adding the ability to purchase in-app content for Doom 2, Ultimate Doom, Final Doom, Master Levels.

This initial release also contains multiplayer, but it is local multiplayer only (WiFi). Competitive internet multiplayer was listed a possibility for a later update when we spoke to Carmack in June.