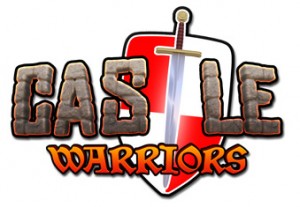 The best way to think of Game Resort’s Castle Warriors is as a hybrid that takes the visuals of ngmoco’s Star Defense and blends it with the real-time strategy of Phil Hassey’s Galcon. And, that’s how you get this entertaining and immersive offspring.

Presented in a series of letters between you and Queen Mynera, the storyline involves a kingdom under a cloud of darkness as evil foes plunder the land. You command an army of warriors, warlords and giants in the war against an overgrown gang of orcs, trolls, ogres and demons who are just as conniving and intelligent as you are. The objective is simple: prevent the enemy conquest of the land by taking control of all the castles on the battlefield.

With 3 levels of difficulty—easy, normal and hard—you’ll do battle through 12 maps in a single-player campaign. The maps themselves look amazing, and each has physical geographic features that can both hinder and help depending on how wise you are. 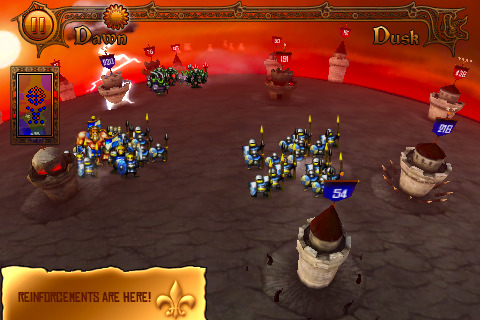 On each map, a series of castles exist with the base of operations for each side located on opposing sides. Castles in your control bear a blue flag while those of the enemy have a red one. Each flag shows the number of troops stationed there. Empty castles do not have flags and are usually ripe for the picking. A mini-map in the upper left corner shows the location of castles and is color-coded accordingly. Attacking an enemy tower is as simple as sending troops to that tower. Battles take place automatically with the outcome determined algorithmically. In this way, the relatively simply strategic gameplay is very similar to Galcon. Unlike Galcon, troop production is not done in real time. At the end of each day, you are awarded reinforcements based on the outcomes of the day’s events. 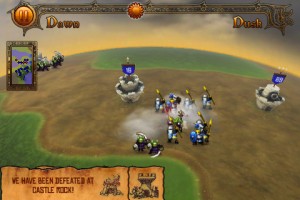 The game controls are simple. As in Star Defense, you can pan across the map by dragging the screen, although there is some noticeable sluggishness on first generation devices. Also just like Star Defense, however, some players may not like the constant need to pan back and forth to properly manage your troops — though, arguably it does add to the overall experience. To move troops, you tap on the castle where the troops are located, and then tap on the destination of the other castle. The game does a terrific job of showing troop movements and skirmishes when opposing forces cross each other in the field. As for selecting the amount of troops, Castle Warriors provides some pre-set options which you can click through fairly quickly (e.g. move some, move half, move more than half). One issue introduced with this interface, however, is accidental castle selection while panning across the field. This can result in unintentional troop movement which can be frustrating.

When attacks occur on your castles, an event tab appears at the bottom of the screen identifying the castle in distress. Simply tap on the event tab and you’re automatically taken over to the castle. As you conquer castles and the days pass, additional troop reinforcements are made available since you’ll lose a fair amount of troops in battle. Castles also physically upgrade at the end of the day to provide additional defenses and capabilities. While you have no direct control over these upgrades, the more troops you have stationed in a given castle, the faster the upgrades will come.

The gameplay requires some quick thinking and even faster actions since you’ll often find yourself defending your castles against marauding enemies. One of the best parts of the game is the in-field skirmishes which unfortunately are not something you can reliably plan. Visibly, it’s rather entertaining to watch with blood and accompanying sound effects. The element of time also adds to the challenge of this game. Since battles can only take place during the day, and you have a limited number of days to complete your mission, the onus is on you to plan ahead. Keep in mind that the farther away troops have to travel, the more impact time will play since they have a greater distance to cover.

Castle Warriors is a simple and attractive strategy game that should appeal to a broad range of players. While the 3D panning interface allows a rich graphical experience, it does introduce some potential performance and usability issues. Still, it delivers an immersive experience that does make you want to play “just one more time".