One of the big surprises to me in iPhone gaming is how much I’ve been drawn to tower defense games. I never really understood why people were so into them back when the Warcraft III tower defense maps were so popular (and don’t even get me started on Defense of the Ancients) but the iPhone quite literally is the perfect platform for these types of games. Ngmoco’s Star Defense [App Store] is the latest in the series of tower defense games for the iPhone and with the Twitter challenge as well as the early review copy I was sent, I’ve managed to sink a ridiculous amount of time into this game. 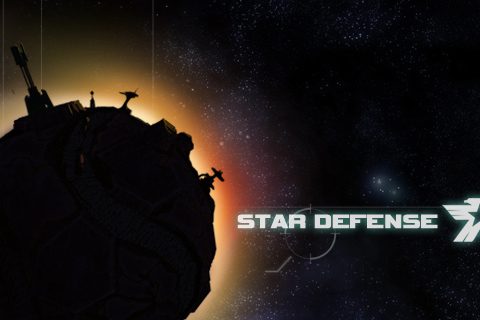 The basics of Star Defense are no different from any other tower defender, and if you’re even remotely familiar with the genre you won’t need any explaining to pick it up instantly. You place towers along a path to defend your shield wall from hordes of S’rath invaders, kill them to get credits to buy more towers or upgrade your existing ones, survive for a certain number of waves, and win. Standard stuff. 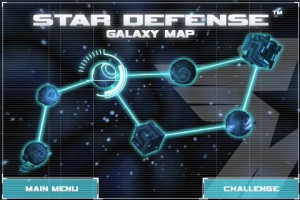 What sets Star Defense apart from the other tower defense games on the iPhone is having to build your towers on 3D spheres (cubes in later levels) and constantly managing the viewport of the game using standard iPhone gestures. It’s all very intuitive and works exactly as you would expect, pinching controls zooming, a single finger swipe moves the camera, and two fingers on the screen rotates it. Handling the camera creates an effect similar to fog of war in real time strategy games, and as the path the S’rath travel down snakes all over the planet you’re defending, you’re only ever capable of seeing half of it at a time.

Included in the game are five tower types which cover the standard array of towers we’ve seen in other tower defense games. Gauss Turrets serve as the standard low-cost tower, Neo-Plasma Blasters have a damage over time effect, DX-3 Cannons slow enemies, Phase Coils do area effect damage, and Quantum Launchers do high single target damage. Naturally, each can be upgraded, and part of the strategy of Star Defense is deciding when to upgrade and when to build more, as each upgrade is progressively more expensive. 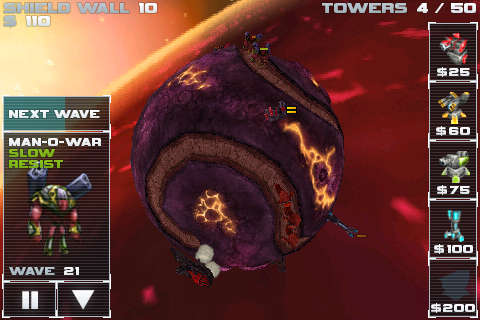 Additionally, each tower has a damage type which may be more or less effective depending on the enemy. For example, some of the S’rath are resistant to fire, so your massive array of Neo-Plasma Blasters will be rendered ineffective. Obviously this forces you to have a variety of towers, which adds a level of complexity as some tower defense games are just a race to fill up the map with whatever the best tower is fully upgraded. 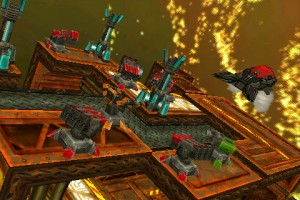 In this initial offering of Star Defense players can fend off the S’rath across seven different planets, as well as playing an endless Challenge mode. Each planet can be played on three difficulty levels, and I found them to be varied enough that each one required a different strategy to complete. ngmoco previously detailed on their blog about the work that went into balancing the way Star Defense plays, and it really shows.

Playing the game on Easy is, unsurprisingly, very easy. Unless Star Defense is your first tower defense game, I’d recommend starting on Normal. I’ve found Hard to be brutal, and while I haven’t yet broken out the ol’ pad of graph paper to map out some of the levels as I did when competing in the Twitter challenge, I’m getting close to it.

Instead of achievements in Star Defense, you earn commendations. Some of them will be easy and you will earn them without even trying, but others like completing 40 waves without selling any towers or upgrading 1000 towers total will take some work. 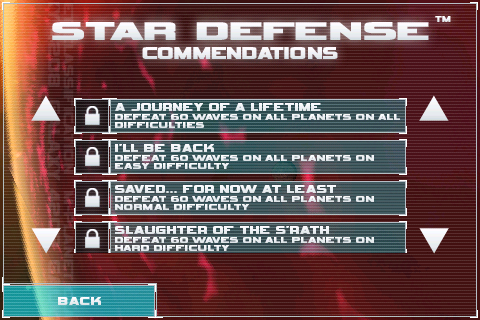 The included galaxy map is a great time, but the Challenge mode is where the meat of the game is going to be for hardcore players looking to compete against friends. This is exactly what we played in the Twitter challenge, so give it a try and see how you could have done against us.

Star Defense was demonstrated during the WWDC 2009 keynote, and towards the end, ngmoco’s Stephanie Morgan revealed the ability to (BAM!) add a second galaxy to your pocket via microtransaction downloadable content (DLC) add-on packs. DLC has been a hot topic lately on our forums, and I’ve seen some people suggest that Star Defense is an incomplete game that simply a vehicle to sell things that should have been included in the release. 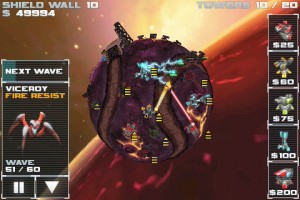 As I posted in a previous story, this is an area that ngmoco seems to be taking very seriously. I asked several people at the press event what their plans were with DLC and everyone stressed that they were approaching it cautiously, being sure to provide a good value to the gamer, with no intentions to nickel and dime anyone. Morgan mentions in the keynote video that the additional galaxies add tons of gameplay, so I’m having a hard time getting worked up over them selling add-ons for the game if they do in fact substantially increase the originally included playtime. And with that said, Star Defense is certainly a complete game in its current form.

So I suppose the inevitable question here is do I recommend Star Defense? It is more expensive than its competitors, but it does have all the fit and finish you would expect in an ngmoco game. The 3D graphics are great, the backgrounds are colorful, and I really enjoy the 3D camera management of the game. Star Defense gets incredibly hectic in later levels when multiple waves of S’rath are out at once, as all your towers need to be managed in real time. This is a welcome change from other similar games where you pause, build a few things, wait to get more money, and repeat. Star Defense brings an unexpected level of action to a genre that classically just has you building and waiting.

Ngmoco and a dozen other companies are presently sponsors of this site, but that does not affect our choice of coverage or influence our reviews.