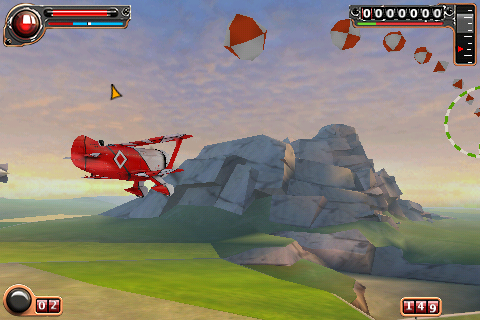 iChromo’s 2.5D flight action title Aera [$2.99] was one of the many new games to recently arrive in the App Store. Aera is a sort-of casual flight simulator / side scroller at heart.  At least, that’s how iChromo describes it — but it’s a little more side scroller than flight simulator. Granted, that description might be a little hard to picture.  Think Pandemonium! — or closer still, NiGHTS Into Dreams — but in an airplane.

Aera puts you in tilt control of a variety of aircraft across a range of different play challenges.  There’s Aerobatic / Solo, which is a run through the hoops and between the floating mines to collect a set number of balls within a time limit, Dog-Fight, which is, well, an aerial dog fight, and Race, which is a pylon to pylon (and back) run against the clock while dodging those pesky mines.  The various challenges can be played in a Campaign mode which features two tutorial levels and 10 missions (three Solo, three Race, 4 Dog-Fights) or a Quick Game mode that varies the challenges based on the difficulty level selected.  There’s a no-pressure Free Flight mode, as well. There are two unlockable locations and 3 unlockable planes. 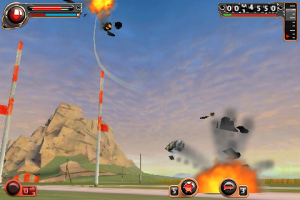 The game features fluid animation and excellent graphics which combine to make a truly enjoyable tilt-centric gaming experience.  And there’s lots of tilting.  Left / right tilting controls the plane’s atttiude, a jerk forward or back performs a 180-degree roll, and a delicate dance of forward / back jerks files the plane in a blade formation (think of the Duke boys’ best moments in the General Lee) which is useful in dogfights, as enemies cannot hit your craft when flying on end. Sensitivity adjustments are offered through the settings panel.

And speaking of dogfights, that’s all about weapons, of course.  In dogfight mode, your plane has a forward gun with unlimited ammo as well as a limited amount of heat-seeking missiles that auto-lock if an enemy is well lined-up in your path.  When enemies are destroyed they release slowly falling point bonuses that can be collected to increase score.  But be careful collecting those close to the ground.

The game also features a local Wi-Fi multiplayer mode (with Duel and Capture the Flag modes) which I was not able to test.

As far as negatives, there seems to be a freezing bug in the game affecting some players. This forced the following warning from the developer:

IMPORTANT: please unplug your iPhone/iPod from computer when playing Aera, otherwise game can freeze occasionally; this issue is being addressed, will be fixed in the update.

As well, with only 10 distinct levels of progressive difficulty without a global leaderboard, long term playability is a legitimate concern. The game, however, does deliver such a fun and unique experience, that there can still be a lot of joy in replaying the included levels. The developer also indicates that they do plan on rolling out additional levels and locations over time.

Overall, Aera is a beautiful and enjoyable game that lived up to our expectations.