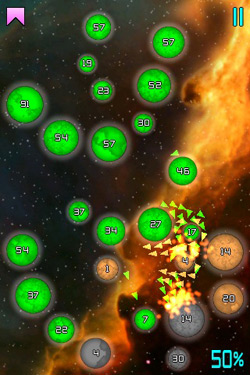 I have never been a huge strategy game nut. Civilization, Starcraft, Populous–I just never had the patience. There have been a few strategy gems out there unique enough to catch my attention however, and they’ve given me hours of satisfying gameplay. Battlezone (1998) was one.  And I’m happy to report I’ve found another: Galcon [App Store] from Hassey Enterprises.

Galcon is a fast-paced arcade strategy game set in space.  The game begins with a galactic playfield filled with planets of varying size.  The green planets belong to the player, neutral planets are grey, and planets of any other color belong to the enemy.  The goal is to take over all the planets.

The size of the planet indicates the production rate of the planet.  A number appears on each planet indicating how many ships exist on that planet–for neutral and enemy planets, this is the number of ships that must be defeated in order to take control of a particular planet.  The player clicks on one or more green planets and then drags to a target planet in order to set ships in motion to invade said planet.  A number appears in the lower corner of the screen indicating what percentage of ships from an origin planet will be sent to a target planet with each deployment.  50% is the default, but tapping the number toggles through various values.

The game offers several modes of play, including Classic, which operates as described above, as well as Stealth, where the enemy ships cannot be seen, and Vacuum, in which the game is played against a timer.  There are 10 different levels of play, and with each consecutive level, the enemy becomes smarter.  Eventually the number of enemy ships will no longer be displayed on the planet face.

Galcon had me hooked at the first game.  While it’s a fairly no-frills experience with very basic graphics, Galcon successfully delivers a solid strategy gaming experience that is an ideal match for the iPhone.  A sucessful bout of galactic conquest can be had, in one-handed play, in under 3 minutes.  And the fast-pace of the game, forcing instant decision making, delivers a very satisfying session of pick-up strategy gameplay.

This video from the developer shows the basic gameplay. Note this demonstrates version 1.0. Version 1.1 has since added sound effects: