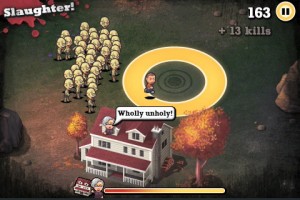 On Friday, we reported on EA’s plans to create a micro-studio within the company called 8lb Gorilla to create original games to target the low-end casual iPhone gaming market.

Their first entry Zombies & Me [App Store] appeared in the App Store this weekend. This $0.99 game is targeting the pick-up and play audience that seems to be becoming a staple in iPhone gaming.

The release of any game under the EA masthead seems to evoke high expectations and strong emotions from portions of our audience. Some of these emotions appear to be misplaced as we feel all games should be taken for what they are regardless of publisher. At $0.99, this simple game clearly fits into the causal pick-up-and-play market that has been so well dominated by the likes of Flight Control, Pocket God and Doodle Jump. For these types of games, it comes down to the gameplay “hook" and whether or not they are compelling. Our final verdict of Zombies & Me as a $0.99 game ends up as “good, but not great".

In Zombies & Me, it is the apocalypse and zombies are coming out of the woodwork to get you and your grandma’s house. Without any weapons, the best you can do is use yourself as bait to lead the zombies under falling bombs. The targets appear at random and you get bonuses for killing zombies in bulk. The trick is getting out from under the targets yourself before the bomb hits. If the zombies get too close to you, they will grab you and prevent you from moving. You have to tap rapidly in order to get out of their hold. This can, of course, cause your untimely demise if you are under a bomb.

Our video shows how the game is played:

Technically, the game is well produced with nice artwork, music and presentation. The gameplay itself is simple, and while the tap controls seem to work, there is a certain amount of imprecision to them. Similar to Warpack Grunts you tap where you want to go which ends up with me just tapping back and forth in a zig-zag. An unfortunately placed on-screen pause button also causes some inadvertent breaks in the action with accidental taps. While I’m typically against gratuitous accelerometer usage, I wonder if that might have been an improvement for this particular game. 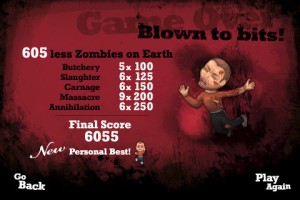 While the game does offer you your personal high score stats including total number of zombies killed and most killed at once, there is no global/online high score tracking. For a game where high-scores are the driving goal, it seems to be a glaring omission.

Beyond that, the game offers some simple gameplay that is encapsulated within the video above. It’s reasonably fun to play, and death usually comes as a surprise, giving you a bit of a kick to try one more time. While I believe the game will have its fans, I don’t think the gameplay “hook" is compelling enough to strongly recommend. So, in the end, for just $0.99 it’s good but not great, and we’d hope to see the inclusion of a global high score.

Of course, we’re still interested to see what else 8lb Gorilla has to offer us in the coming months as they explore this market.