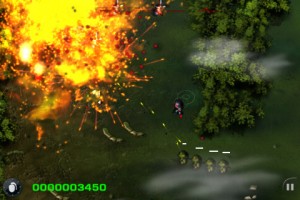 Freeverse’s Warpack Grunts appeared in the App Store tonight for only $0.99 [App Store].

The game will have immediate appeal to fans of the Amiga game Cannon Fodder which used a very similar squad-based game design. In fact, one of the first reactions to the game acknowledges “It’s a light weight Cannon Fodder. Not as deep as CF was. Still maintains the general spirit of CF, and adds to it somewhat on it’s own ways."

We’ve spent a brief amount of time with the new release and have compiled these first impressions. The game is an action shooter in which you control the movements of your squad of fighters with a single touch control system. Tap on the screen and your squad will walk towards it. Double tap and the squad will fire with their machine guns. Additional weapons, tools and health can be found scattered around the map and each level has a very specific objective. There are 40 missions total in campaign mode as well as a Zombie Survival mode (yep, pretty much how it sounds) and the game has 4 levels of difficulty (Easy, Normal, Hard and Nnnnnaarrgh!). That last difficulty level should give you an idea of the tone of the game, itself, which is amusingly lighthearted for a war game.

Here’s a developer provided video of the game:

The game is very much an action-arcade shooter so while each level seems to have its tricks and challenges, its feels like more of an old-school arcade game rather than a deep strategy game that some might have expected.

There seem to be a few valid early complaints about the game. One is that campaign mode always restarts you at the very first level. In theory, this might be expected for an arcade-type game, but the early levels are basically tutorial levels, so it’s hard to get excited about playing them again and again. (Note: you can temporarily circumvent this with the inadvertent ability to practice any level.) The next potential issue is that the control system (touch screen) just doesn’t seem ideal… at least not with our brief time with the game. While it’s certainly passable as you put a little time into it, it just still feels a bit awkward as you are frequently obscuring your view.

The game is still quite fun and offers plenty of dramatic explosions and cartoon violence for only $0.99. So, if you’re looking for arcade action or just want to feel like you have an Amiga again, Warpack Grunts seems to be a good bet.